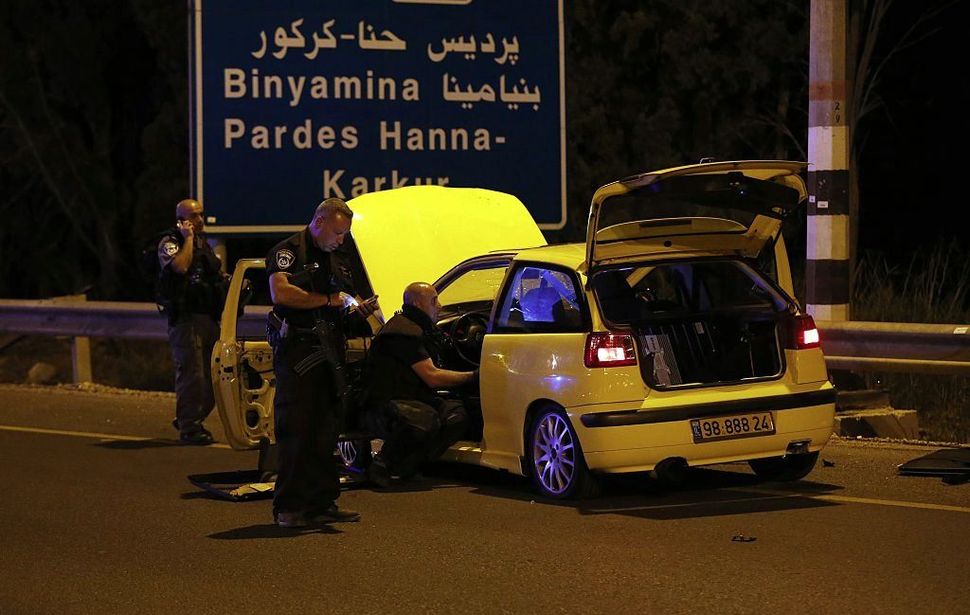 Israeli security forces and forensics inspect a car used by an Israeli Arab to attack a group of Jews near the northern Israeli kibbutz Gan Shmuel, on October 11, 2015. Image by Getty Images

JERUSALEM (JTA) — An Israeli court revoked the citizenship of an Arab-Israeli man over his terrorism conviction — reportedly for the first time — in a stabbing and car-ramming attack.

The Haifa District Court on Sunday agreed to the request of Interior Minister Arye Deri in the case of Alaa Ziad. Ziad seriously injured three Jewish Israelis in the October 2015 attack at the start of what has been called the “stabbing intifada.”

Reports said it was the first time that an Arab Israeli has lost his citizenship over a terrorism conviction. Ziad’s mother is an Israeli citizen but his Palestinian father is not. Deri has also said he would revoke the Israeli residency permit for Ziad’s father.

Ziad can appeal the ruling while remaining in the country as a temporary resident, at least until October, Ynet reported.

The Adalah Legal Center for Arab Minority Rights and The Association for Civil Rights in Israel said in a statement that a decision to revoke Ziad’s citizenship “deviates from precedent as well as international law.” They noted that the Supreme Court in Israel decided not to revoke the citizenship of Yigal Amir after he assassinated Prime Minister Yitzhak Rabin in 1995.

Ziad drove his car into a group of people waiting at a bus stop near Kibbutz Gan Shmuel in northern Israel, near Hadera. He then exited his car and began stabbing people, injuring four, including a soldier seriously. One of the victims was a 15-year-old girl.

Ziad was found guilty of four counts of attempted murder last year and sentenced to 25 years in prison.

It is not known to where Ziad would be deported.