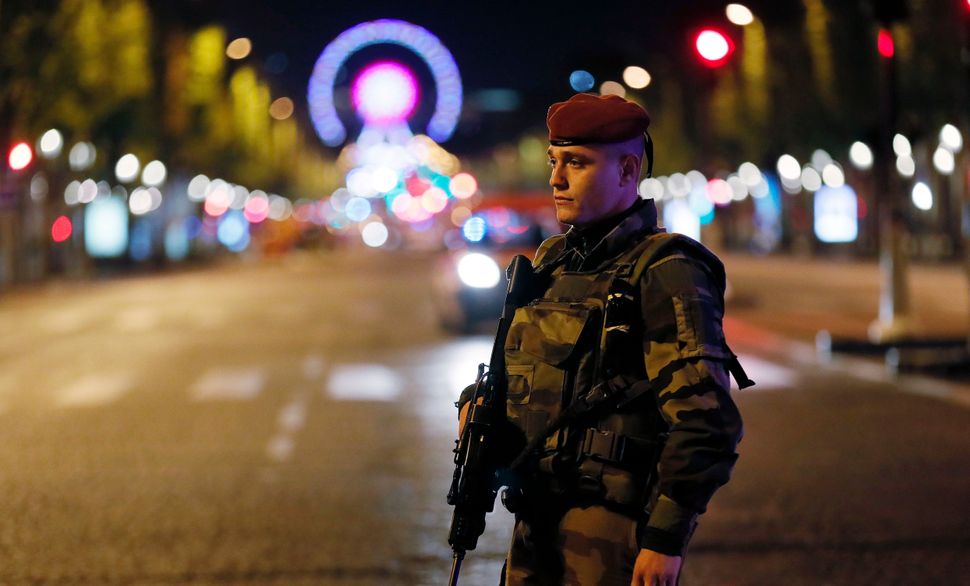 A French soldier stands guard on the Champs Elysees in Paris after a police officer was shot dead, April 20, 2017. Image by Thomas Samson/AFP/Getty Images

(JTA) — Amid outrage in France over a suspected terrorist attack against police officers, the CRIF umbrella group of French Jews suggested the incident highlights indifference to anti-Semitic violence.

CRIF on Wednesday posted on Facebook a tongue-in-cheek statement, questioning whether authorities would place under psychiatric evaluation a suspect who fled after ramming six police officers with his car in the Paris suburb of Levallois-Perret. Two officers sustained serious injuries and the rest suffered moderate ones in the Wednesday morning attack.

“What do you think, should this insane person be put in a psych ward while we contemplate the reasons for his actions?” CRIF posted in French on Facebook.

It was a provocative reference to the handling by authorities and the media of the slaying of a Jewish woman, Sarah Halimi, in April by a Muslim man who was sent to observation as per his insanity plea even though he has no record of mental illness. He shouted about Allah while killing Halimi, his neighbor, whose daughter he allegedly once called a “dirty Jewess.”

CRIF has campaigned vigorously for the inclusion of an aggravated element of a hate crime into the murder indictment against Halimi’s killer, Kobili Traore. The judiciary’s omission of this element is a “cover up” of the anti-Semitic character of the crime, CRIF President Francis Kalifat has said.

Speaking about the Levallois-Perret attack, Mayor Patrick Balkany told French radio the incident appears to be a “deliberate attack” and that French security forces are conducting a massive manhunt for the suspect.