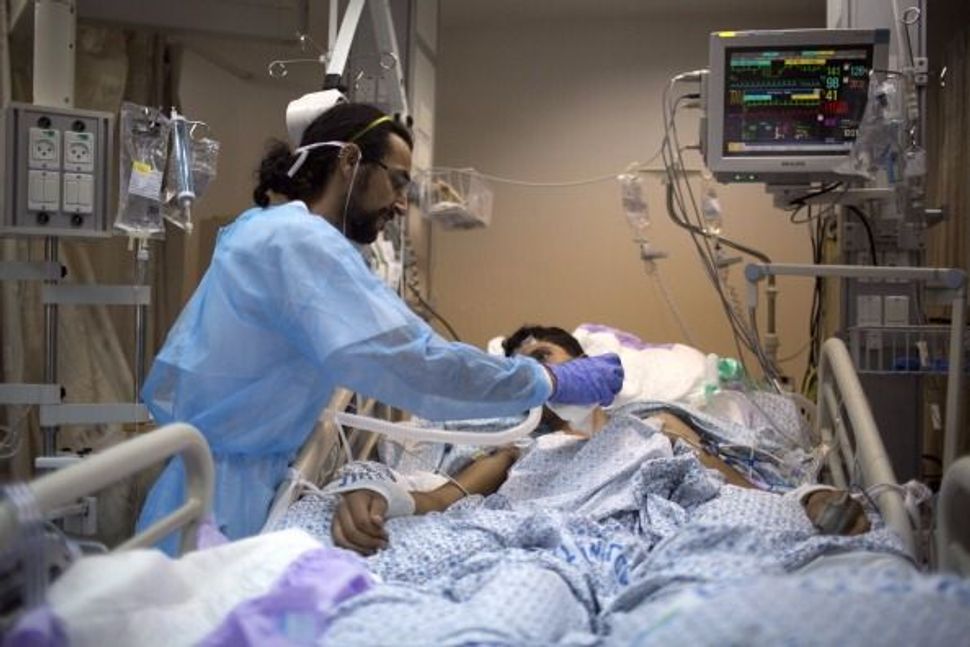 An Israeli medical staff tends to a Syrian young boy, who was wounded in the ongoing violence in Syria, as he lies on a hospital bed during his treatment at Ziv hospital in Safed. Image by Getty Images

BUENOS AIRES (JTA) — An Argentinean-born and trained Israeli doctor was honored at the Buenos Aires city parliament as an “outstanding personality in the human rights field” for assisting victims of the Syrian civil war who come to Israel for treatment.

Dr. Alejandro Roisentul, who has lived in Israel for the last 28 years, received the kudos on Tuesday, for his part in bringing the Syrian patients to Ziv Medical Center in Safed, Israel.

“Syrian injured people, even children, who came to the border of Israel by foot, in very bad condition. The IDF brought them to our hospital and we the Israeli doctors, helped them, cured them. They looked at us as the enemy but after being taken care of in Israel they changed their views. I hope that these small steps also can help toward peace,” Roisentul told Argentinean media.

Roisentul, born in Buenos Aires in 1964, graduated as a dentist from the University of Buenos Aires in 1986 and three years later made aliyah and joined the Israel Defense Forces as a dentist. Currently he is head of the Maxillofacial Surgery Unit of Ziv Medical Center, a hospital located in Safed, in northern Israel, about 40 miles from the Syrian border.

On Tuesday, the Buenos Aires city parliament honored him in a ceremony led by parliamentarians, the country’s human rights secretary and the Israeli ambassador.

The official website of the Buenos Aires parliament describes him as “an Israeli that heals and saves lives of Syrians who do not know their neighbors or have a distorted view (of them).”