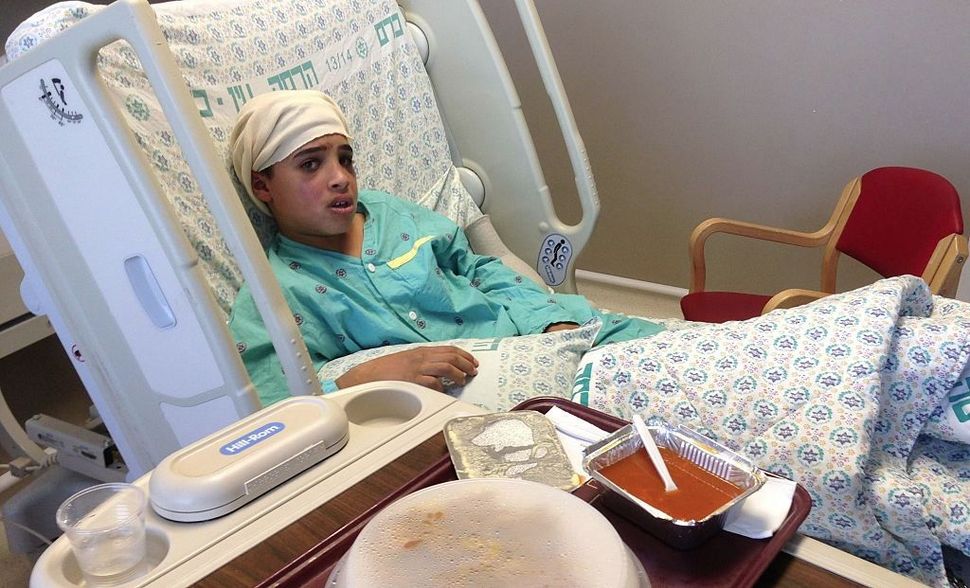 13-year-old Ahmed Manasra, who committed a stabbing attack in Pisgat Ze’ev in Jerusalem, sits in his hospital bed at the Hadassah Medical Center on October 15, 2015. Image by GPO/Getty Images

JERUSALEM (JTA) — Israel’s Supreme Court reduced the prison sentence of a Palestinian teen who stabbed an Israeli 13-year-old and another man in a Jerusalem neighborhood.

The court shortened the 12-year sentence of Ahmed Mansra by 2.5 years, citing a positive report on his rehabilitation.

Mansra carried out the attack in October 2015 in the eastern Jerusalem Jewish neighborhood of Pisgat Zeev with his 15-year-old cousin Hassan Mansra, who was killed by police during the incident.

The Israeli teen and an Israeli man, 21, were seriously injured in the attack.

“Despite the fact the appellant’s conviction of attempted murder was lawful, one must not ignore the fact his role in the incident was minor compared to that of his cousin,” the ruling said. “In addition, one must take into account the appellant’s young age, the rehabilitation process he is undergoing, and the opinions filed in his case. Furthermore, an expert opinion by the probation service recommends mitigating the appellant’s punishment and shortening the prison sentence given to him.”

Mansra, of eastern Jerusalem, was reportedly the youngest Palestinian to be convicted by an Israeli civilian court.

The teen was hit by a car as he ran from security services following the attack and was treated in an Israeli hospital. A video of him being cared for was released after Palestinian Authority President Mahmoud Abbas accused Israel of “executing” him.

Shortly after his arrest, Ahmed reportedly said that he and his cousin had planned to kill a Jew in revenge for the treatment of Palestinians in the West Bank and Gaza, and the believed change in the status quo at the Temple Mount. Later in his interrogation Ahmed changed his story, saying they only wanted to scare Jews. He later reportedly apologized to his victims.