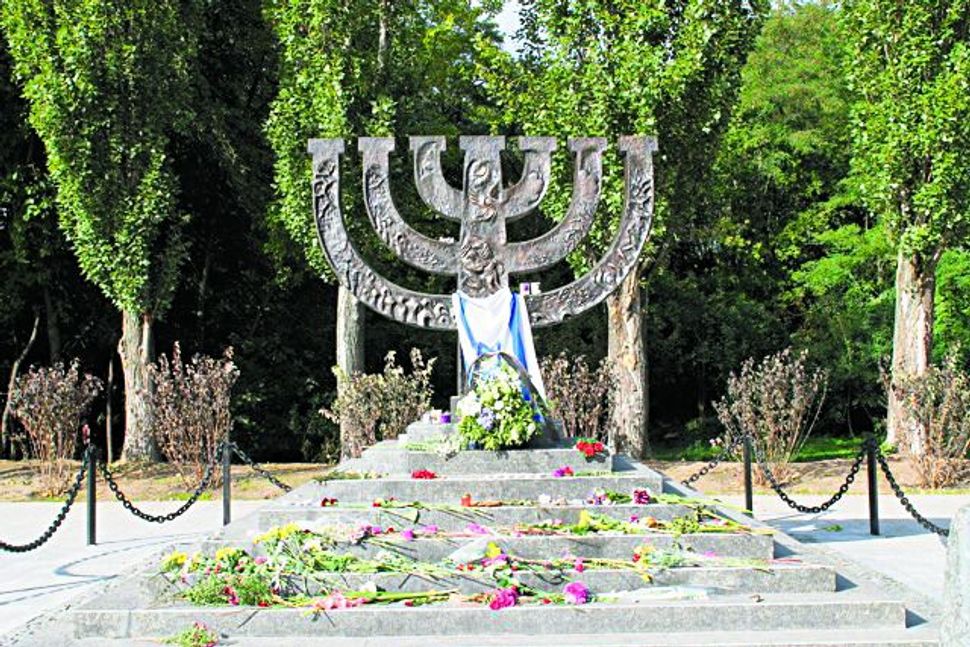 A menorah sits at the site of Babi Yar today. Image by Benjamin Cohen

(JTA) — Before murdering tens of thousands of Jews at Babi Yar near Kiev, Nazi troops dumped at the killing site dozens of Jewish headstones they had stolen from Jewish cemetery, researchers in Ukraine discovered.

“The tombstones were removed from a local Jewish cemetery during the Holocaust and thrown into the same ravines where over 150,000 Jews, Roma people and Ukrainians were murdered during the Holocaust,” Marek Siwiec, a former Polish politician and current head of the Babi Yar Holocaust Memorial Center, said in a statement earlier this week about the discovery.

Enjoying a mandate from the Ukrainian government, Siwiec’s organization, which was set up last year, is heading international efforts to commemorate the Babi Yar tragedy in a manner befitting its scale. Despite many failed initiatives to do so,  Jewish victims are memorialized at the site only by an unfenced 6–foot menorah, which is situated near a dumping ground for industrial waste and is vandalized regularly.

“The significance of Babi Yar is of upmost importance, at this horrendously difficult site, the largest single act mass murder of Jews took place during the Holocaust, with 37,771 brutally murdered during a 2 day period, it is our duty not just to remember this site but also proactively learn from the darkest days of human history to build a better future,” Siwiec said in the statement about the discovery.