Australian State Media Explains Why It Left Israel Off The Map 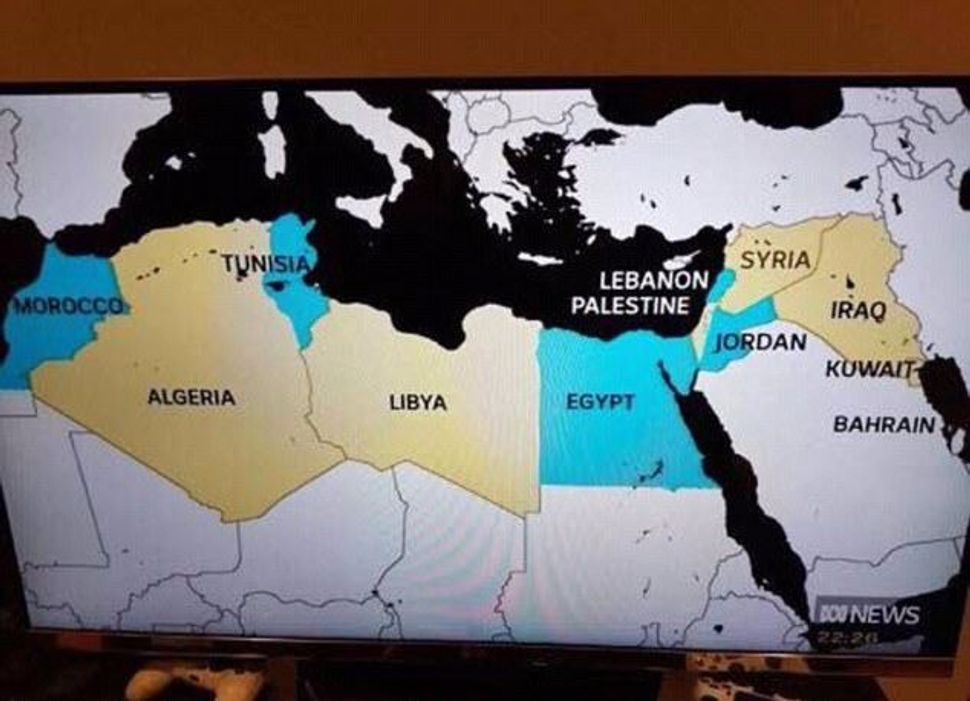 SYDNEY (JTA) — Australia’s national news service defended its decision to broadcast a graphic showing a map of the Middle East that included Palestine but not Israel.

Shown during an Aug. 17 segment on ABC News, the map illustrated a story about how laws in 11 Muslim-majority countries and the Palestinian territories treat rape victims.

“The story was about the repealing of a law in Lebanon that allowed rapists to escape punishment if they married their victims,” a senior executive for the Australian Broadcasting Corporation told JTA. “The map showed other countries where this law had already been repealed (in the blue) and countries where campaigners are actively trying to have it repealed (in the yellow).”

Israel, the executive explained, never had the law to begin with, so it was not included. Had it been included, the spokesman suggested, the criticism might have been even more intense.

The graphic made news after a pro-Israel, anti-Islamist activist, Avi Yemini, posted it on his Facebook page.

“Last night ABC News wiped Israel off their map,” Yemini wrote. “They’re literally doing the Islamists’ dirty work for them. We must DEFUND these traitors immediately.”

Yemini was not satisfied with the public broadcaster’s explanation.

“They’ve hit back with an excuse that could almost work,” he wrote on Facebook. “Except for one ‘minor’ detail: PALESTINE IS NOT A COUNTRY!”

Australian State Media Explains Why It Left Israel Off The Map