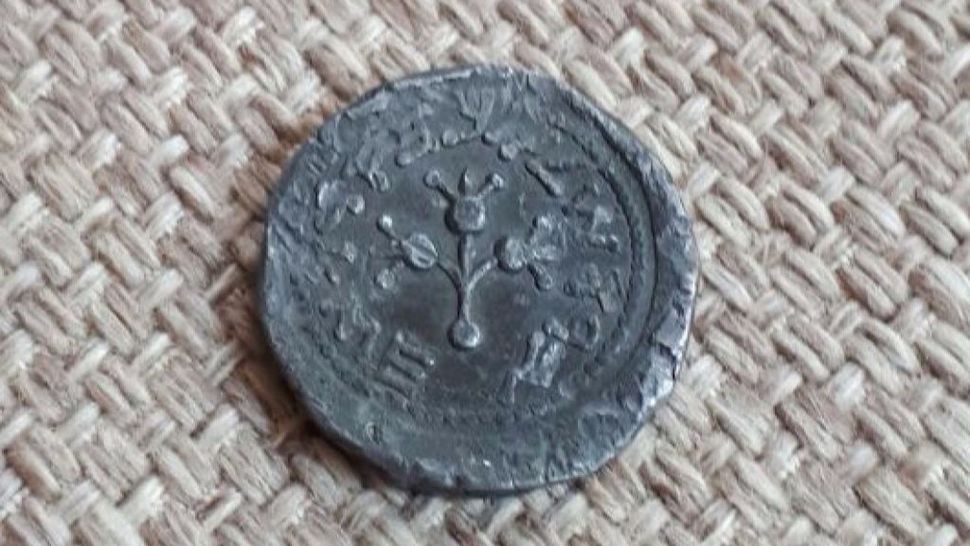 A 2,000-year-old half-shekel coin was discovered by an eight-year-old Israeli girl near the West Bank settlement of Halamish. Image by Courtesy

JERUSALEM (JTA) — A coin that was believed to be a rare artifact from the Second Temple period found by an 8-year-old girl in a West Bank settlement is actually a souvenir from the Israel Museum in Jerusalem.

Israeli and international media, including the Forward, reported on the find of a half-shekel coin by 8-year-old Hallel Halevy in May near an archeological site in the West Bank settlement of Halamish.

The half-shekel coin dates from a time when it was used to pay a yearly Temple tax, in a custom described in the Torah in Exodus 30:11-16.

The Times of Israel reported that it was alerted Sunday morning that the coin found by the girl is actually a coin created on a small mint in the Youth Wing of the Israel Museum, an annual project for children during yearly Hanukkah activities at the museum. One side of the coin is left blank so that it will not be mistaken for a real coin, according to the report.

Dr. Haim Gitler, chief curator of Archaeology and the curator of Numismatics at the Israel Museum called the Times of Israel to inform it of the mistake, the news website reported.

“There is no chance that it is authentic, it is not an ancient coin. Even to call it a coin is to exaggerate what it is,” Gitler told the Times of Israel, adding that the markings on the “artifact” discovered by the girl are 100% identical to the mold at the museum. “Whether it was 2016 or 2015, that’s more the question,” he also said.