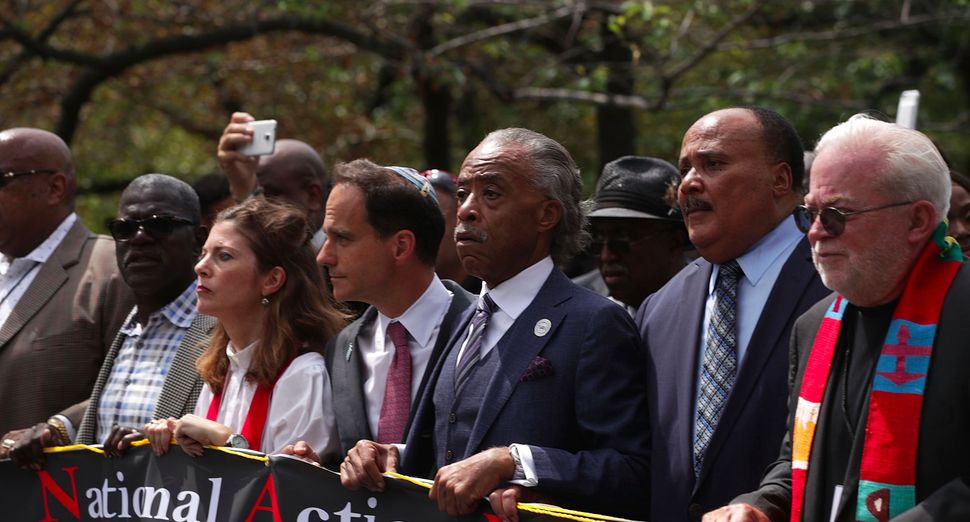 Hundreds of Jews joined with the Rev. Al Sharpton Monday for an inter-religious march through Washington on Monday to protest against the Trump administration.

“We wanted 1,000 rabbis, Sikhs, imams, Christian ministers of all denominations because we wanted to say this nation is in moral trouble,” Sharpton told demonstrators at the Thousand Ministers March for Justice, as reported in the Washington Times.

The march, organized by Sharpton’s National Action Network nonprofit, coincided with the 54th anniversary of the Rev. Martin Luther King’s “I Have a Dream” speech in Washington in 1963.

“It’s immoral to try to take the vote from people that blacks and Jews and other people suffered and died for,” Sharpton told marchers. “It’s time for moral leaders of all religions to get rid of their fear and speak up and stand up and stand up together,” he added. “I want the media to see this crowd of rabbis and priests and preachers. And we may not agree on every local issue, but we agree on a universal issue, and that is morality must be above party politics.”

Sharpton has long been a decisive figure in the American Jewish community, making its participation in the march especially noteworthy. A well-known civil rights activist, talk show host and Baptist minister, Sharpton famously clashed with Jews during the Crown Heights riots in 1991. His comments after a 7-year-old black boy was run over by a Jewish driver inflamed both communities. The Jewish community was equally appalled four years later when he called a Jewish landlord in Harlem a “white interloper.”

The march was already planned prior to events in Charlottesville, Virginia, earlier this month which saw clashes between white supremacists and counterprotesters, and protesters chanting “Jews will not replace us!”

Sharpton referenced those events in his speech. “You’re going to see the victims of Nazism, the victims of white supremacy march today to the Justice Department and say we don’t care what party is in, we are not going to be out, we’re coming together,” Mr. Sharpton said.

The Washington Times said some 300 Jews took part in the march, with the Religion News Service website spotting a sign proclaiming “Black Lives Matter to This Rabbi.”

Rabbi Ilene Haigh from Vermont told the Washington Times, “The greatest act of nonviolent resistance is not to let us be torn apart. I believe this is a statement of that. As long as any part of our society is not free or equal, none of us are.”

The significance of Monday’s march was noted by Washington Post op-ed writer Dana Milbank, who observed that “a rehabilitated Sharpton, who has privately expressed regrets to Jewish leaders for his past actions, made Jews the centerpiece of his Thousand Minister March.”

Milbank wrote that, in a pre-march prayer session with the Religious Action Center of Reform Judaism, he told them that “we could not commemorate this day and face the challenges today without standing together as Dr. King stood 54 years ago.” Sharpton also referenced the “Mississippi Burning” murders, stating: “We should never forget that it was [Andrew] Goodman, [James] Chaney and [Michael] Schwerner that died together — two Jews and a black — to give us the right to vote.”

Milbank quoted Sharpton as telling the Religious Action Center that “We have had days good and bad, but from this day forward . we’re going to make sure we do our part to keep this family together. When we can see people in 2017 with torches in their hands, talking about ‘Jews will not replace us,’ it’s time for us to stop praying to the cheap seats and come together.”

Sharpton’s comments were reportedly well received by the Jewish group, with Milbank quoting Reconstructionist Rabbi Malka Binah Klein of Philadelphia calling it “miracles out of a mess.” r