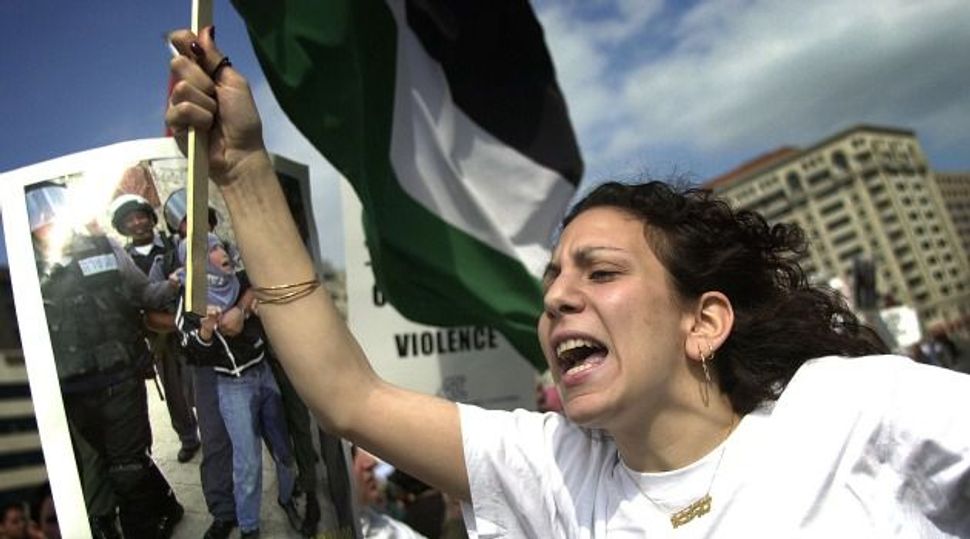 A member of Students for Justice in Palestine protests in Washington, D.C. Image by Getty Images

(JTA) — The Students for Justice in Palestine chapter at the University of California, Irvine was punished with disciplinary probation for two academic years for disrupting a pro-Israel event held on campus.

After the announcement of the punishment last month, SJP said Friday it would appeal the decision. The appeal process is expected to take several weeks.

In addition to the two years of probation, the campus group must hold six meetings a year to discuss free speech, and adhere to a requirement to meet with university administrators two weeks before hosting any event, according to a statement from the university.

The group was sanctioned for disrupting an event held in May by the Students Supporting Israel organization which featured a panel of Israeli military veterans from the Israeli group Reservists on Duty.

About 30 members of SJP entered the auditorium during the question and answer session and began chanting slogans such as “Israel, Israel what you say? How many people did you kill today?” and “Free Palestine,” in a protest captured on video.

The sanctions were leveled after the UC Irvine Office of Academic Integrity and Student Conduct decided the action was in violation of university policy, according to a statement issued by the office.

SJP at UC Irvine was also sanctioned for disrupting a pro-Israel campus event in May 2016.