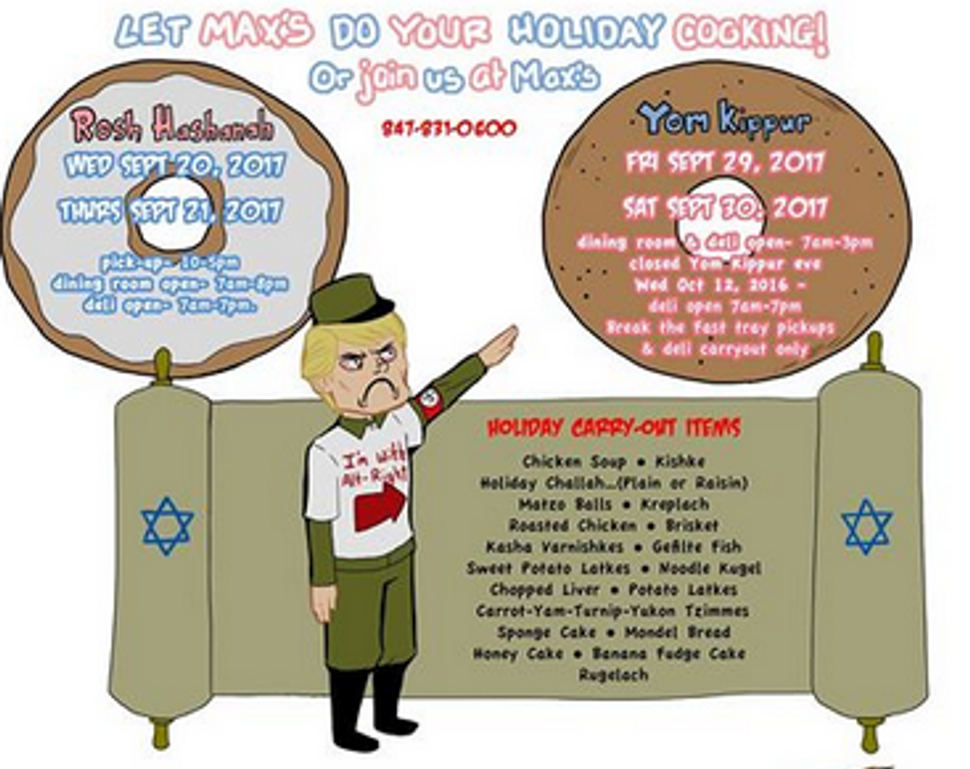 (JTA) — The Jewish owner of a Jewish deli in suburban Chicago has come under fire for a cartoon of a Nazi resembling Donald Trump on its High Holidays catering menu.

The menu was posted on the Max’s Deli Facebook page on Aug. 23, but only began to gain notice on Thursday.

The doodled figure wears a military uniform and has a Nazi swastika armband, and is wearing a T-shirt that reads “I’m With Alt-Right.” The figure’s blonde hair is evocative of Trump.

The post, which also references the white supremacist rally in Charlottesville also reads: “It was never true, “Never Forget.” It was a lie, “Never Forget.” Look how easily we pretend nothing’s happening. Or the problem is Steve Bannon instead of Donald Trump.”

Under the heading “Atonement,” the post read in part:”3 Little Words. I Was Wrong. To those of you who called, who reached out, who saw me against the ropes, who offered a hand instead of a fist, L’Chaim! To those of you who bashed, who reacted without thinking, who fed on the indignation of others, who threatened my business, L’Chaim!”

Morelli told the Chicago NBC affiliate that he was afraid to not speak up during this moment in history.

“I’m a Jew. I cannot pretend, in this movement, that I’m not afraid—but I’m also afraid of being afraid I’m not going to go quietly on a train,” he said.