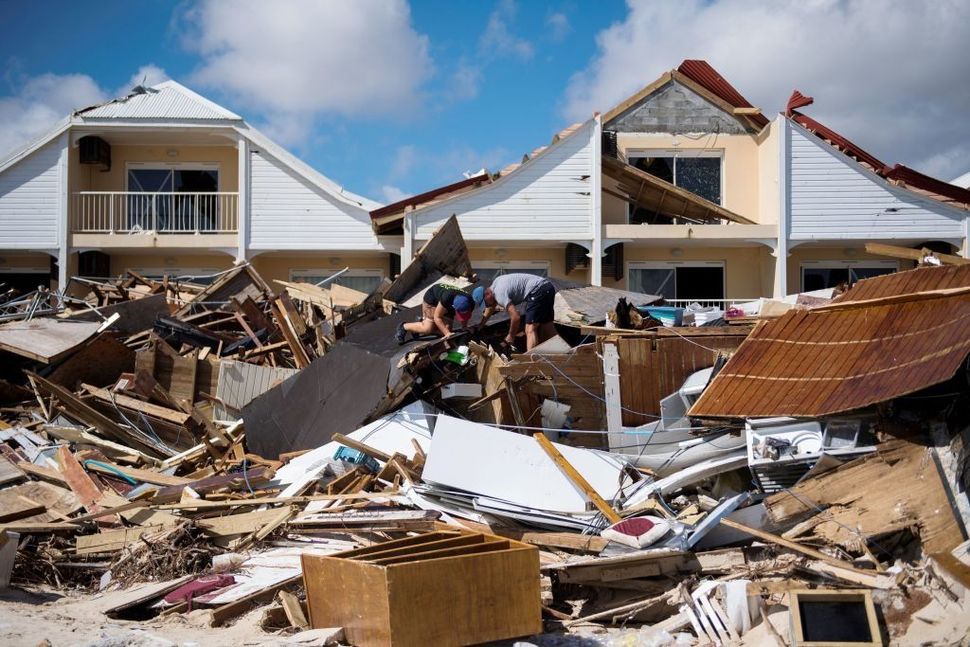 (JTA) — After remaining on the Caribbean Island of Saint Martin and riding out the onset of Hurricane Irma in the Chabad House mikveh, the wife and children of the Chabad emissary were evacuated on Shabbat.

Rabbi Moishe Chanowits, his wife Sara and five children aged under 8, remained on the island to offer assistance to others when Hurricane Irma first hit early on Wednesday. However, as the winds picked up speed again over Shabbat, the family had difficulty finding a safe haven.

The Chabad House that had sheltered them earlier in the week was a building under construction that sustained damage in winds that reached 180 miles per hour.

Even though Shabbat had already started, the family contacted the World Chabad in New York and the ZAKA search and rescue organization to request assistance in being evacuated, despite the fact that all sea and air routes to the island were closed.

Arranging the rescue involved, among others, representatives from Chabad, ZAKA, Israel’s National Emergency Management Authority and Foreign Ministry, and the Military Attache in Holland.

A private plane was located to rescue the family, but the Dutch authorities on the island would not give the plane permission to land, despite Chabad and Israeli officials turning to government officials in Holland.

Eventually a pilot bringing humanitarian aid into the area agreed to pick up the family, and flew them to Puerto Rico. Rabbi Moishe Chanowits remained on the island to assist others.

Influential Orthodox rabbis, including Rabbi Chaim Kanievsky of Bnei Brak in Israel, announced late last week that Jews could travel on Shabbat to escape Hurricane Irma, under a principal known as pikuach nefesh, since saving a life takes precedence over observing the Sabbath.