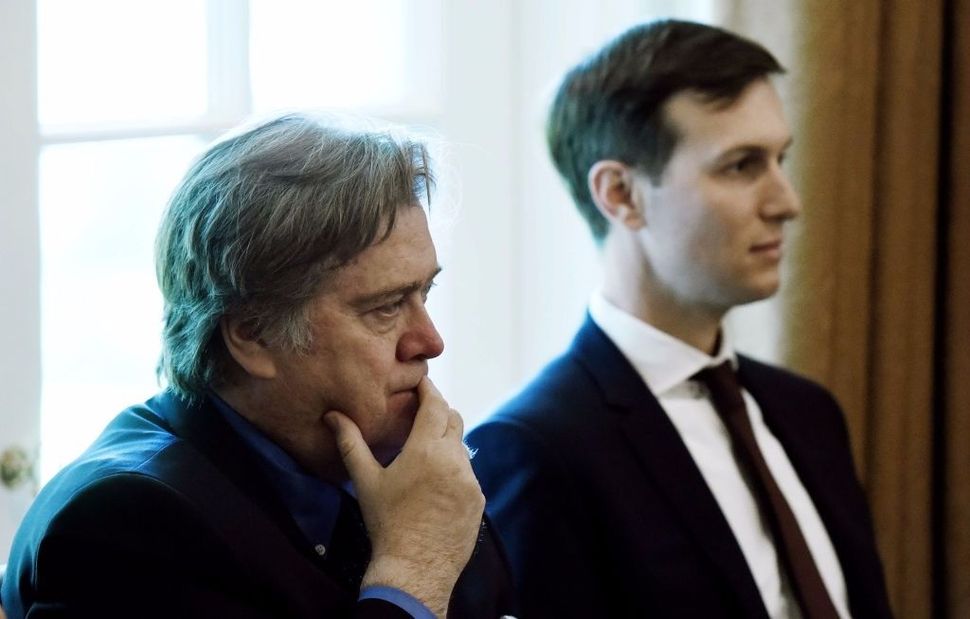 Jared Kushner (R) and Steve Bannon, two of President Trump’s top advisers, listen as the president speaks during a meeting in the Cabinet Room of the White House, June 12, 2017. Image by Olivier Douliery-Pool/Getty Images

Jared Kushner sent a text message to Steve Bannon approving of Bannon’s combative Fox News appearance on Monday, in which the former White House chief strategist claimed he is recruiting primary challengers for nearly every Republican senator up for reelection next year.

Bannon received the message at a steakhouse across the street from Fox News’s New York studios, multiple sources told Politico.

Politico reporter Annie Karni wrote that Kushner’s declaration of support surprised Bannon’s dining companions because Bannon’s strategy “undercuts the very members of Congress the White House needs as partners if Trump wants to pass any part of his domestic agenda, including tax reform.”

Indeed, while Bannon, the head of Breitbart News, has long been dismissive of conservative politicians making compromises, Kushner and his wife Ivanka Trump have been hosting bipartisan dinners in their home to discuss issues of shared concern like criminal justice reform.

Kushner’s show of support is also surprising given how often the two were at loggerheads during Bannon’s time in the White House, with Bannon reportedly promising to “go to war” against White House “globalists” like Kushner after he resigned.