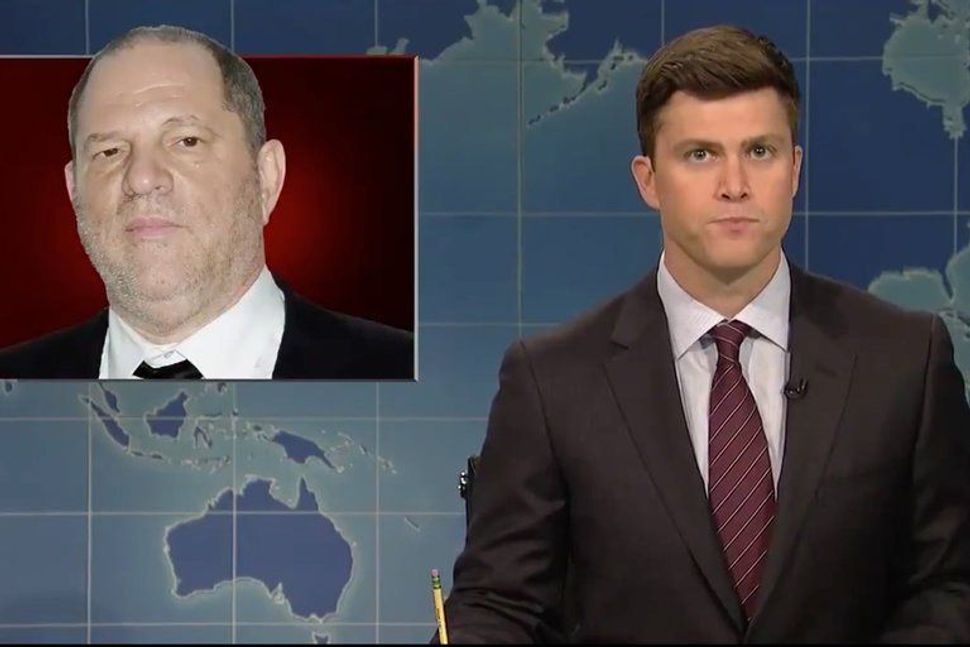 “Saturday Night Live” was criticized for not joking week about Harvey Weinstein, the disgraced Hollywood producer who has been the subject of numerous sexual assault allegations. On the most recent episode, “Weekend Update” co-host Michael Che explained that the inherently unfunny scandal put the show in a “tough spot.”

But as a photo of Weinstein filled the screen, Che added, “But it’s so easy to make jokes about a guy that looks like this. I mean, he looks like chewed bubble gum rolled in cat hair.”

“You assaulted dozens of women. That’s not a mistake — that’s a full season of ‘Law & Order.’ Your name’s a verb now, dude, as in, ‘If this guy tries to Weinstein me, I’m going to cut off his little Harvey.’ Doesn’t he look like a well-dressed skin tag?”

Co-host Colin Jost got shots in too:

“Apple has announced that it will add hundreds of new emojis to its iOS system, including a person at a spa, a vomiting face and a shushing finger — finally giving emoji fans the ability to describe what it was like to work for Harvey Weinstein.”

Another sketch featured a symposium of actresses discussing sexual harrasment in Hollywood, with one actress, played by Kate McKinnon, claiming that she had once met with Weinstein.

“I was invited to his hotel room. And when I arrived he was naked, hanging upside down from a monkey bar. He tried to trick me into thinking his genitals were actually his face. It almost worked. The resemblance is uncanny.”