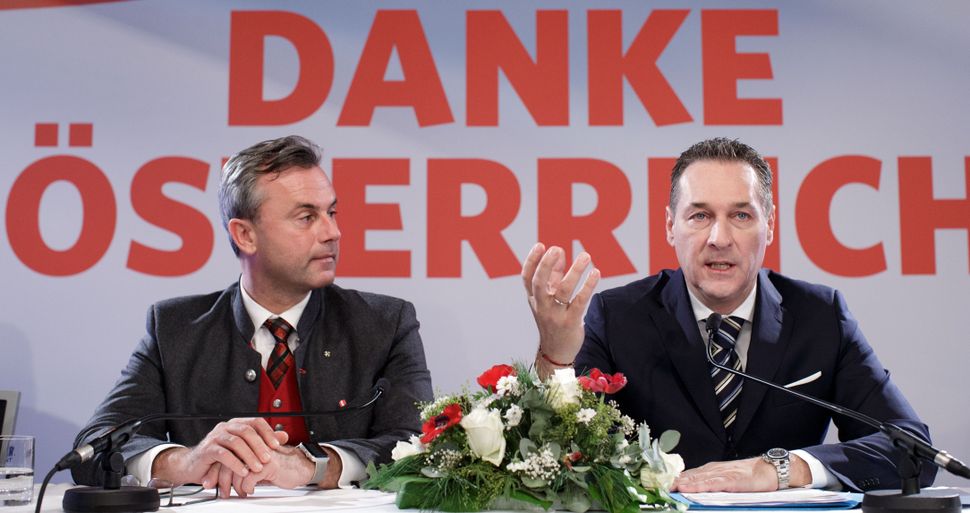 (JTA) — Jewish groups called on the head of the conservative Austrian People’s Party to exclude a far-right party from the new government coalition following national elections in Austria.

Sebastian Kurz, head of the center-right Austrian People’s Party, or ÖVP, at 31, will become Europe’s youngest leader. His party came in first with a projected 30 percent of the vote in Sunday’s poll. The far-right Freedom Party, or FPO, came in second place with a projected 27 percent of the vote according to exit polls, slightly ahead of the center-left Social Democrats Party of outgoing Chancellor Christian Kern.

World Jewish Congress President Ronald Lauder, who was the U.S. ambassador to Austria from 1986 to 1987, said in a statement that the FPO “is still full of xenophobes and racists and is, mildly put, very ambiguous toward Austria’s Nazi past.”

Lauder strongly warned against including the Freedom Party in any governing coalition. “Like the AfD in Germany, the National Front in France, or Jobbik in Hungary, the FPÖ is an extremist party that panders to racists and anti-Semites and whips up feelings against minorities,” Lauder said. “It is led by a man who in his youth expressed clear sympathies for the Nazis.”

There are currently about 9,000 Jews living in Austria, according to the Jewish Virtual Library figures for 2016, making them about 0.1 percent of the country’s population.