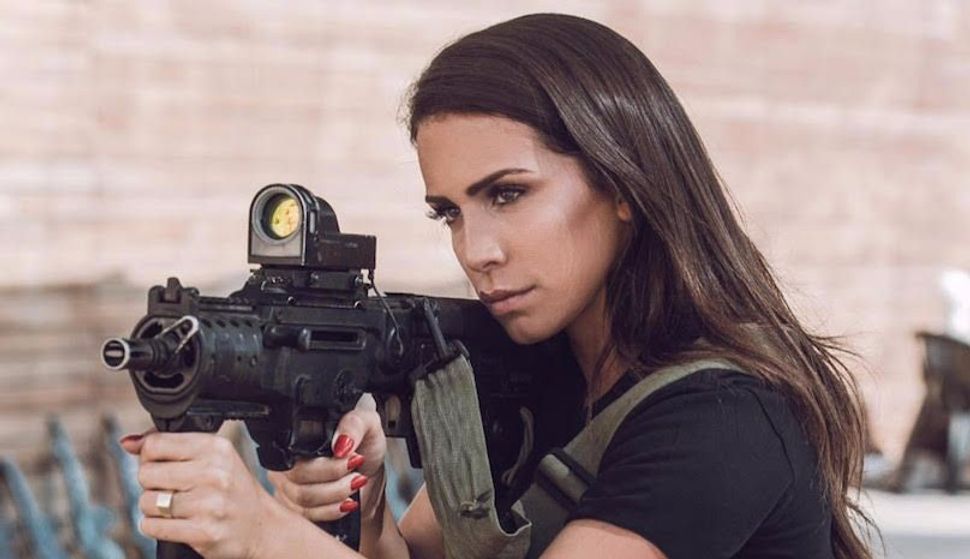 (JTA) — Orin Julie may look like just another “gun bunny,” as such models are sometimes called, but she is the industry’s secret weapon. She is a former Israeli combat soldier who is trained to discharge the weapons she poses with.

“I don’t stand around in swimwear,” she said in an interview at the office of her Tel Aviv modeling agency. “I know how to hold guns, how to shoot, how to do combat stuff — and Americans appreciate that.”

Julie’s military background has helped her stand out as a weapons model and win a following of legions of American gun enthusiasts. But the reception to her modeling also demonstrates the vast differences between the the gun cultures of the United States and her native Israel.

To her fans in the United States, she is a symbol of the very American mixture of constitutional rights, gun ownership and a culture in which “sexy” can refer both to a beautiful young woman and the assault weapon she cradles.

Two years into her career, Julie, 23, has modeled for a half dozen Israeli and American companies that sell firearms and related products.

Meanwhile, Julie’s Instagram account has racked up 145,000 followers, many who gush over photos of her in lipstick and crop tops bearing the latest arms, from petite handguns to massive assault rifles.

Julie said her love of guns and her career modeling them emerged from her Zionist upbringing. Growing up in the central Israeli town of Kiryat Ono, she recalled being a “very spoiled girl.” But in high school, as she began thinking ahead to her mandatory military service, Julie quietly resolved to become a combat solider.

“No one thought I could do it,” she said. “But I really love Israel, and I wanted to show I could do more and be more.”