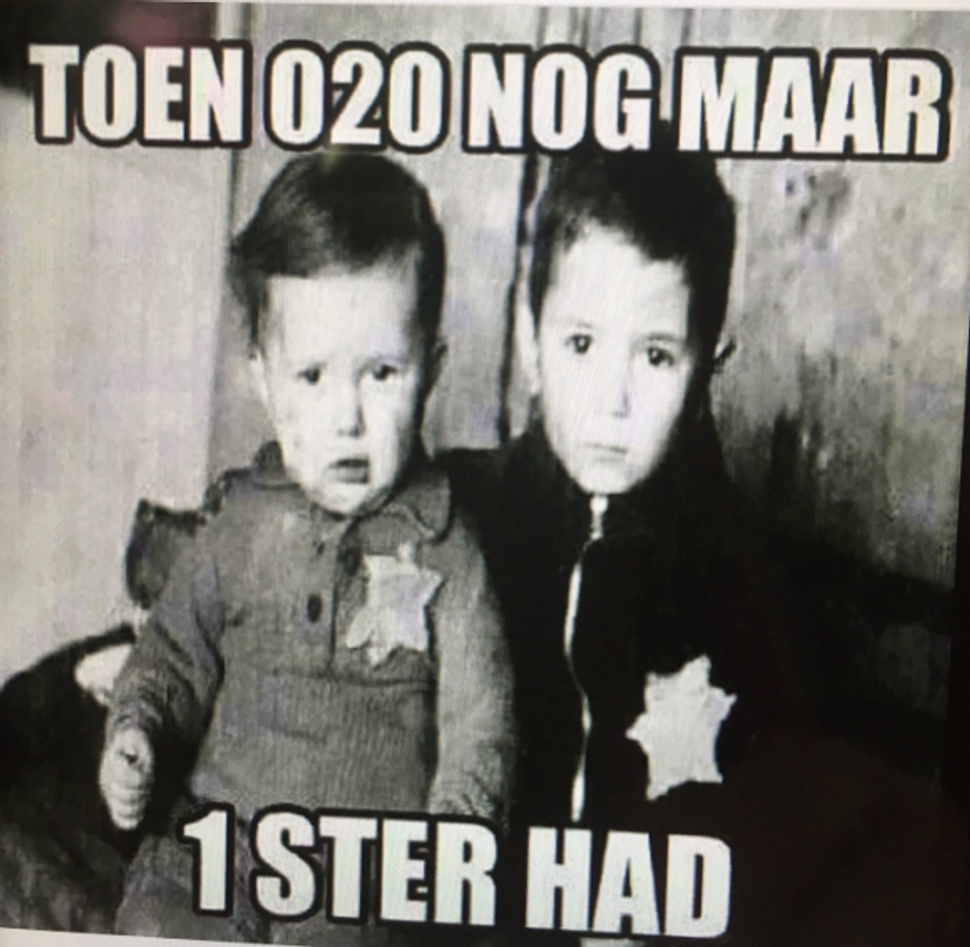 AMSTERDAM (JTA) – Soccer fans in the Netherlands used a picture of child victims of the Holocaust to taunt a rival team, in what Dutch activists against racism called a new low for anti-Semitic rhetoric in sports.

The photo featuring two toddlers wearing a yellow star was widely circulated on Twitter under the hashtag #anti020week. The digits are the Amsterdam-area dial code, which in soccer jargon references the city’s main soccer club, Ajax. The picture, in which one child appears to be nearing tears, also featured the caption “When 020 had only one star.”

Shared by many supporters of the Feyenoord team of Rotterdam, the photo offers an extreme example of how fans of Ajax rivals mock the memory of the Holocaust. Ajax players and supporters are often called “Jews” in recognition of the large Jewish community that had existed in the Dutch capital before 80 percent of its members were murdered in the Holocaust by Germans and Dutch collaborators. Some Ajax fans self-identify as Jews.

Past incidents included songs about burning Jews and the SS, and the use of gas and Hamas, but using archival photos of individual victims is unusual.

Erik de Vlieger, a Dutch industrialist and longtime opponent of hate speech in sports, denounced the imagery on Twitter, calling it on Wednesday “a new low point for anti-Ajax expressions by Feyenoord supporters.”

Ronny Naftaniel, the executive vice chair of CEJI, a Brussels-based Jewish organization promoting tolerance through education, also expressed his “shock” at the imagery.

“Feyenoord supporters, for once leave Jews alone if you must taunt Ajax,” Naftaniel said.

Another image shared on Twitter en masse features text resembling the health notice on cigarette boxes that reads “smoking will kill you, so free packs for anu Ajax Jew!”