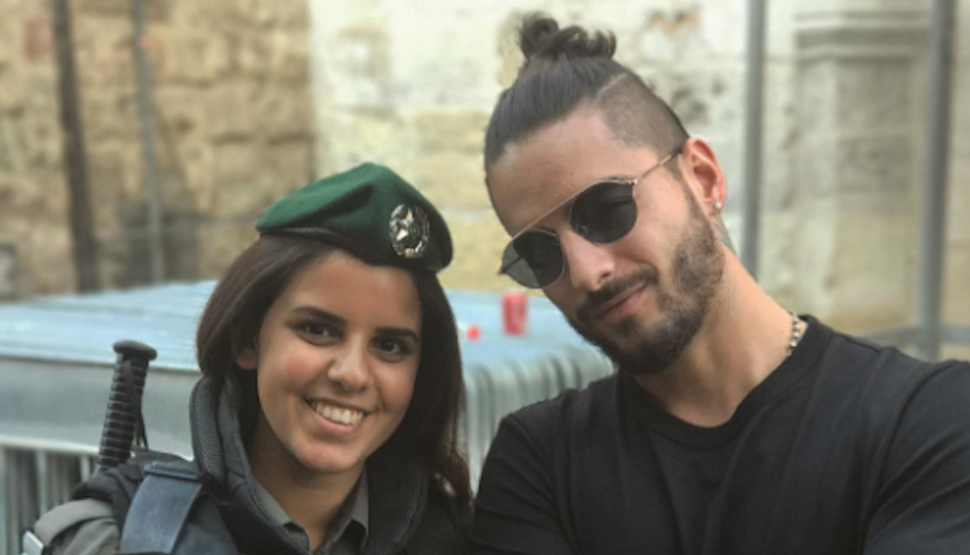 (JTA) — A photo published by a Colombian pop star posing beside an Israeli border police officer has led to a passionate debate among his nearly 30 million followers on social media.

Singer Maluma, who performed in Tel Aviv on Oct. 12, shared on his Instagram account the picture with the smiling female Israeli border police officer above the caption “New security” in both English and Spanish, reported the Enlace Judio news website on Sunday.

The photo has garnered nearly 1.3 million likes and 28,500 comments mostly debating Israel and its policies toward the Palestinians. While several followers supported the photo, others wrote messages such as “You lost all your Palestinian fanatics and I am the first of them,” “Did you ask how many Palestinians she killed before posing for a photo with her?” and “Posing with a member of Israel’s killer army.”

The singer also posted a second picture with Jerusalem in the background, drawing over 1.2 million likes and over 17,200 comments. In addition to Maluma’s nearly 30 million followers on Instagram, he has another 23 million on Facebook and 4.7 million on Twitter.

On Thursday, the Palestinian mission to Colombia tweeted a quote from late Palestinian leader Yasser Arafat calling for the destruction of the State of Israel. The tweet was quickly removed and no explanation or apology was offered.

Colombia is home to some 3,500 Jews in a population of about 49 million people.