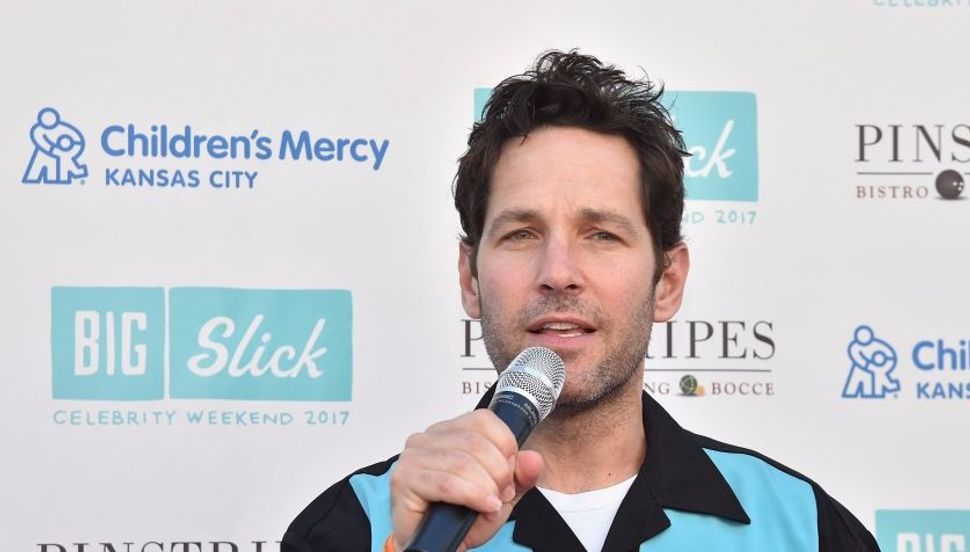 (JTA) — Paul Rudd, in a forthcoming episode of the PBS series “Finding Your Roots,” learns about the anti-Semitism his grandfather endured in England in the wake of World War II.

Just how does he learn of this information?

Courtesy of a Jewish Telegraphic Agency news brief that was published in 1947.

“The Hempstead, Edgware, Catford and New West End Synagogues received telephonic threats this week warning that the structures would be either blown up or burnt down,” a mustachioed Rudd reads from the story.

Rudd’s grandfather, David — after serving five years in the British military during World War II — returned to London. Instead of finding peace there, however, he experienced anti-Semitic riots led by homegrown fascist groups in his neighborhood.

“One of the new fascist groups — Union for British Freedom — held a meeting this week at Edgware, at which Victor Burgess, who was detained during the war as a ‘dangerous person,’ suggested that four British Jews should be flogged publicly,” the brief continued.

“Now think about your grandfather,” host Henry Louis Gates Jr., tells Rudd on air. “He had served in World War II to fight fascism and he comes home to fascism. Can you imagine?”

“I mean, it must have been awful,” Rudd replies.

In the episode, which will air Tuesday, Rudd learns some details about his grandfather, Davis Rudnitsky, who changed his name to David Rudd because he thought it would improve his chances of getting a job. The actor says that according to family lore, David did get a job after the name change — at a kosher butcher.

Growing up, the future movie star says he was detached from religion, but that he used to be called “Jewboy” at school. His family moved frequently during his youth — to places where there were few Jews.

Rudd says in the episode that hearing about his Jewish relatives makes him “feel closer to them and closer to my religion.”

This kind of conclusion is hardly a first for “Finding Your Roots,” now in its fourth season. In previous episodes, Jewish celebrities such as Dustin Hoffman, Carole King, Larry David and Bernie Sanders have all been enlightened about their Jewish pasts.

“For many, learning about their roots brings them closer to their religion,” Gates, a Harvard historian, told JTA in an email. “Many tell me they ‘feel more Jewish’ after we have introduced them to their ancestors.”