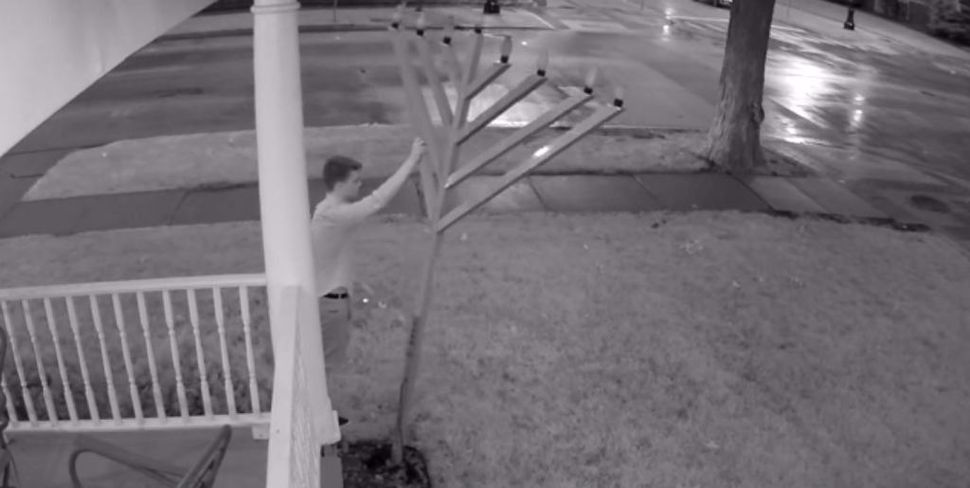 (JTA) — Two University of Illinois students will be charged with a felony for vandalizing the menorah in front of the Urbana-Champaign school’s Chabad Center for Jewish Life.

Jacob Bassler and Nicholas Gustafson, both 18, turned themselves in to university police, the local Fox News affiliate reported.

Security cameras caught two people pushing a shopping cart walking by the Chabad center on the southern Illinois campus on Oct. 28 trying to move the entire 9-foot menorah, then breaking off a branch and walking off with it. The broken branch was later returned but was not able to be repaired.

Campus police spokesman Patrick Wade told the Champaign-Urbana News-Gazette that the students were cited on a felony criminal charge of damage to property because it took place at a house of worship. He said that alcohol played a role in the crime, and it did not appear to be motivated by anti-Semitism. The teens also were cited for allegedly stealing the shopping cart from a local grocery store.

The university’s Chabad director, Rabbi Dovid Tiechtel, said the center is working with an architect to design a steel menorah that hopefully will be up by Hanukkah in December.

In August 2015, a 20-year-old resident of Champaign was arrested for snapping the menorah off at its base. The menorah was similarly vandalized in April 2015, and a branch was snapped off in February 2016.