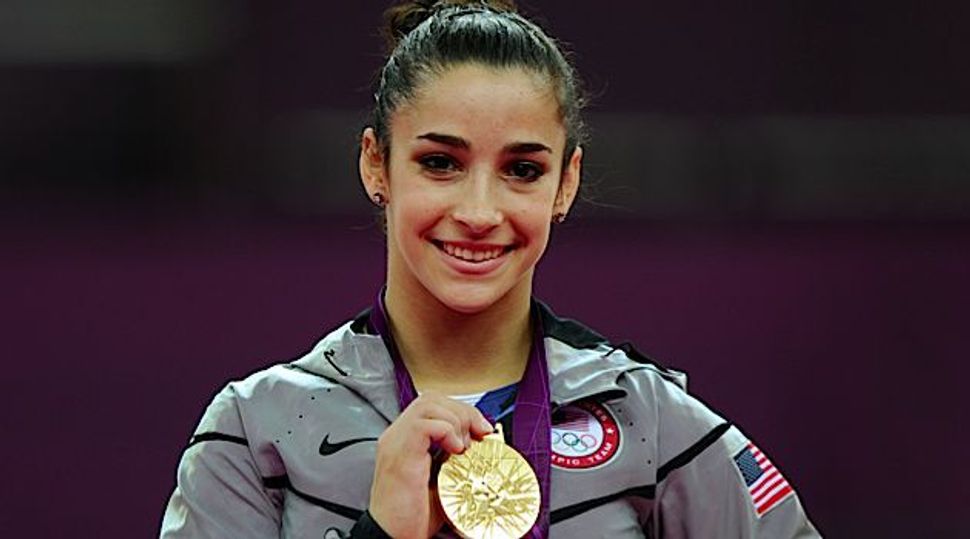 Golden Mensch: We all know Aly Raisman, but how about Yasmin Feingold? Image by Getty Images

Raisman, who is Jewish and is one of the most accomplished gymnasts in US history, made the allegation in an interview scheduled to air Sunday on CBS’ 60 Minutes, as well as in her new book, Fierce.

She is the second member of the gold medal-winning 2012 Olympic women’s team to accuse Nassar of abuse, the online edition of Time Magazine noted in an article published Friday. In October, her teammate McKayla Maroney wrote on Twitter that Nassar molested her for years, beginning when she was 13.

Nassar, who worked as a volunteer doctor for USA Gymnastics, is currently in jail awaiting sentencing after pleading guilty to child pornography charges in Michigan.

Raisman, who is now 23, was 15 when first treated by Nassar, according to Sports Illustrated. The magazine reported that details of her experience appear in a biography set to appear next week.

Nassar  is also named in more than 100 lawsuits filed by gymnasts and athletes he treated while working with USA Gymnastics and at Michigan State University. Those suits claim he sexually abused athletes under the guise of medical treatment. Nassar resigned from USA Gymnastics in the summer of 2015.

Raisman, who competed on the 2012 and 2016 Olympic teams and is the nation’s second most decorated female Olympic gymnast according to Time, is pushing for change at USA Gymnastics, which governs the sport and oversees the selection of world and Olympic teams.

“I am angry,” she said in the 60 Minutes interview. “I just want to create change so [that young girls] never, ever have to go through this.”