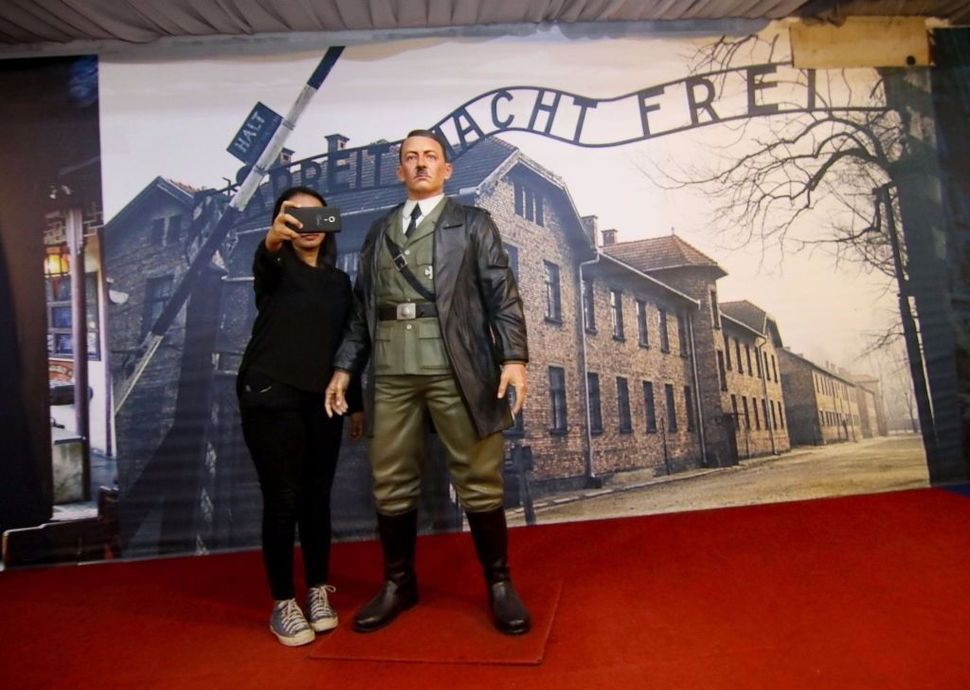 An Indonesian woman takes a selfie with a life-size wax sculpture of Adolf Hitler against a backdrop of the Auschwitz concentration camp at a museum in Yogyakarta. Image by HENRYANTO/AFP/Getty Images

(JTA) — A museum in Indonesia defended a wax figure of Adolf Hitler set against a backdrop of the Auschwitz-Birkenau concentration camp.

Da Mata, a waxwork and visual effects museum in Yogyakarta, amid outrage over the display said it was “fun.” The Hitler figure has been up since 2014.

“No visitors complained about it. Most of our visitors are having fun because they know this is just an entertainment museum,” Warli, the museum’s marketing officer, told The Associated Press in an article that appeared Friday.

Warli, who goes by a single name, said Hitler was “one of the favorite figures for our visitors to take selfies with.” Nazi Germany under Hitler’s command murdered 6 million Jews during the Holocaust.

“Everything about it is wrong. It’s hard to find words for how contemptible it is,” Rabbi Abraham Cooper, associate dean of the Simon Wiesenthal Center, told AP. “The background is disgusting. It mocks the victims who went in and never came out.”

Warli said the museum would consider removing the display after being informed of criticism from the Simon Wiesenthal Center.

“We will follow the best advice and the response from the public,” he said. “Let people judge whether the character is good or bad.”