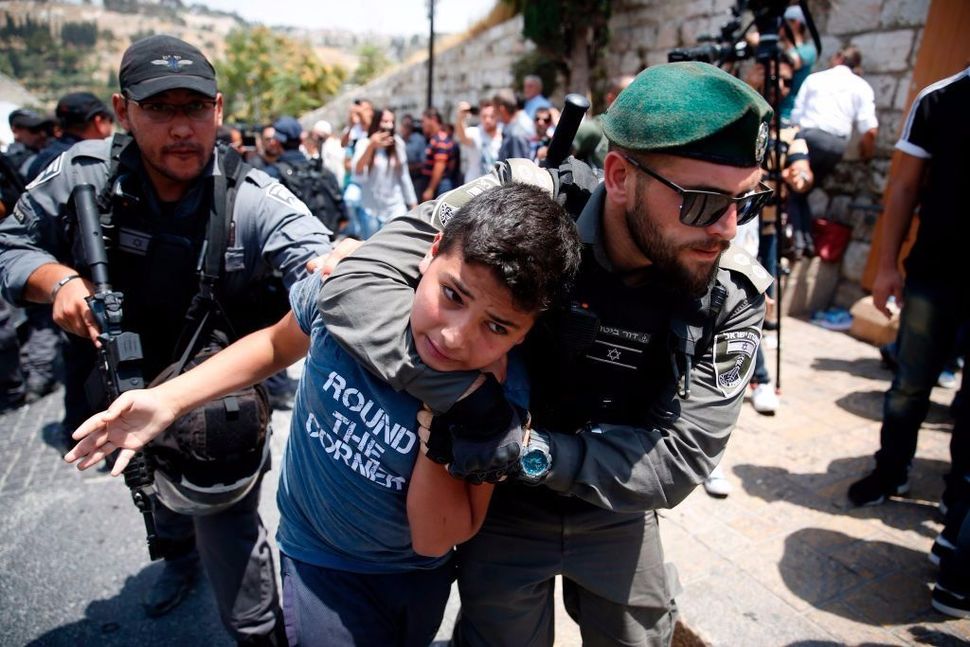 Israeli border guards detain a Palestinian youth during a demonstration outside the entrance to Al-Aqsa mosque compound due to newly-implemented security measures by Israeli authorities in response to a terror attack. Image by AFP/Getty Images

(JTA) — A Minnesota congresswoman has introduced a bill that seeks to prevent the United States from funding Israel’s military detention of Palestinian children.

The legislation introduced Tuesday by Rep. Betty McCollum, a Democrat, has at least nine co-sponsors. It would require the secretary of state to certify annually that U.S. assistance to Israel has not been used in the previous year to militarily detain, interrogate or abuse Palestinian children.

“Congress must not turn a blind eye to the unjust and ongoing mistreatment of Palestinian children living under Israeli occupation,” McCollum said on her website.

“Jewish tradition teaches that each and every single person has inherent dignity and worth and must be treated accordingly,” Jewish Voice for Peace, which backs the bill, said in a statement. “This legislation recognizes and acts upon the inherent dignity and worth of Palestinian children and sends the message that the United States is committed to a future with freedom, safety, and equality for both Palestinians and Israelis.”

Israel processes Palestinians who are not Israeli citizens through a military court system. A 2017 report by the Military Court Watch nonprofit found that last year, 60 percent of Palestinian minors arrested reported experiencing physical violence at the hands of their detainers and 43 percent reported verbal violence.

In response to the report, the Israeli army said it has dealt in recent years with a growing phenomenon of minors involved in West Bank offenses, including security offenses, and takes their age into consideration when enforcing the law.