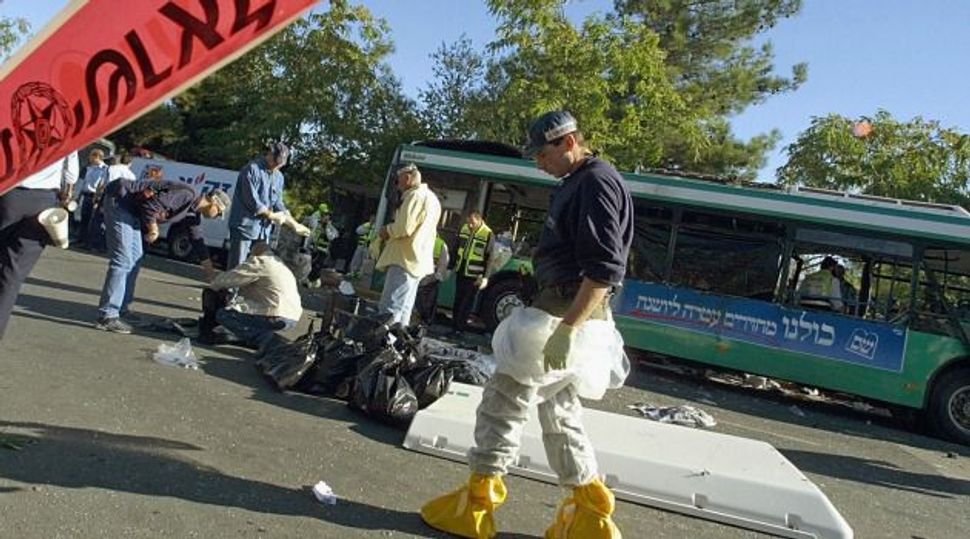 Rescue workers respond to the aftermath of a 2002 terror attack in Jerusalem. Image by getty images

WASHINGTON (JTA) — A key House panel has advanced a bill that would reduce U.S. payments to the Palestinian Authority if it continues to pay subsidies to the families of Palestinians jailed for or killed in attacks on Israelis.

The Taylor Force Act, named for an American who was stabbed to death in a 2016 terrorist attack in Tel Aviv, was approved unanimously Wednesday by the U.S. House of Representatives Foreign Affairs Committee. The bill leaves humanitarian assistance for the Palestinians in place.

“With this legislation, we are forcing the P.A. to choose between U.S. assistance and these morally reprehensible policies, and I am pleased to see this measure move forward in both chambers with so much support,” Rep. Ed Royce, R-Calif., the committee’s chairman.

Rep. Eliot Engel, D-N.Y., the senior Democrat on the committee, praised the bipartisanship working on the bill and said before the vote, “I believe the approach we’re taking today strikes just the right balance.”

The Palestinian Authority denies that the targeted program rewards terrorists, saying that most of the money goes to families whose relatives have been imprisoned without due process.

An array of Jewish and pro-Israel groups praised the committee for the unanimous passage, among them the American Israel Public Affairs Committee, the Anti-Defamation League, the American Jewish Committee, the Orthodox Union, Agudath Israel of America, The Israel Project, Christians United for Israel, the Republican Jewish Coalition and the Israeli American Council.