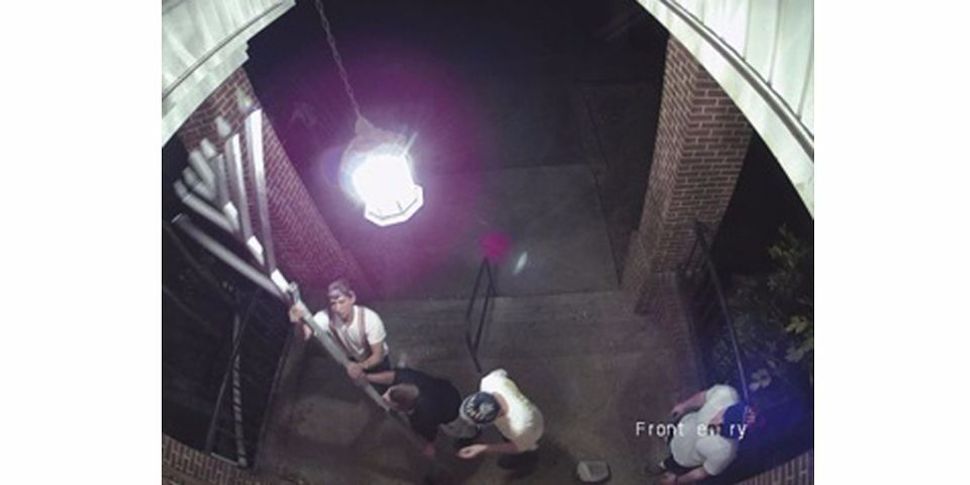 (JTA) — Four Penn State University students are being charged with stealing a 9-foot menorah from the home of the campus Chabad rabbi and leaving it damaged outside a traditionally Jewish fraternity.

The students, who were caught on surveillance camera footage late last month placing the damaged menorah on the porch of the Sigma Alpha Mu fraternity, reportedly are members of other campus fraternities.

State College Police said Monday that they had filed charges against the students, including misdemeanor counts of theft by unlawful taking, receiving stolen property and criminal mischief. They are scheduled to appear in court on Dec. 20.

Rabbi Hershy Gourarie, co-director of Chabad of the Undergrads at Penn State, told The Daily Collegian that the menorah was too damaged to be repaired and would cost about $1,800 to fix.

“I hope that this is a time of introspection for the four suspects. At the right time, I would like to meet with them to educate and heal,” Gourarie said in a statement that also thanked the State College police.

Sigma Alpha Mu also is planning to light a menorah in front of its house on Hanukkah.

University officials released a statement in reaction to the menorah theft as well as other recent hate acts on campus.

“We condemn these actions and will hold students and others involved accountable where we can, including restitution for damage. We do not support nor do we condone racist, misogynistic, anti-Semitic, homophobic or other discriminatory messages or actions. Nor will we allow our University community to become a place where offensive words and behaviors take root,” the statement said.