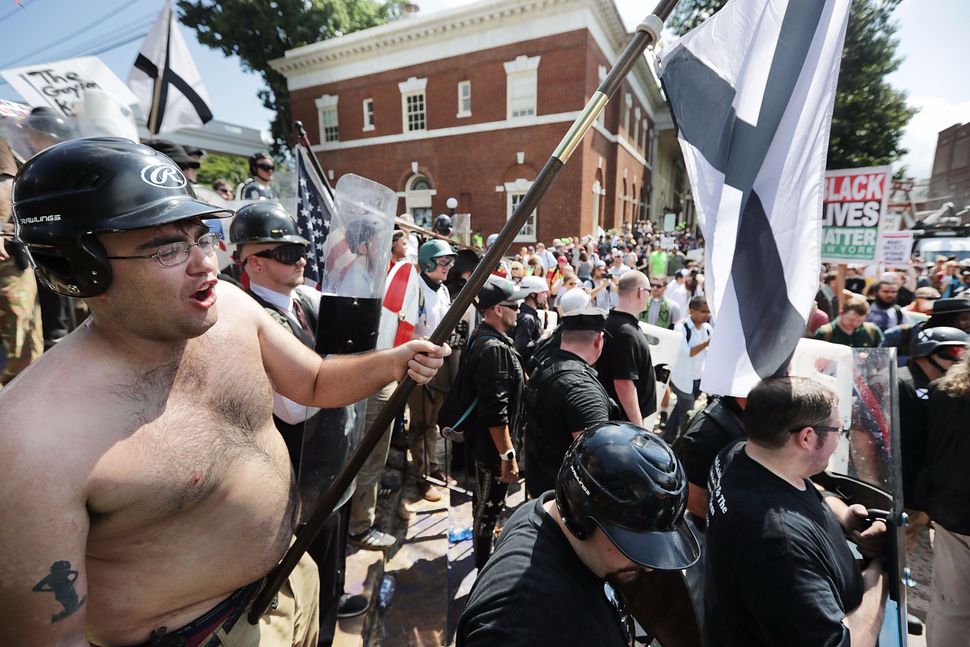 Protestors at the white nationalist Unite the Right rally in Virginia. Image by gettyimages

There were many white nationalist chants heard at the torch-lit Unite the Right rally in Virginia this summer. Some of them — like the Nazi-reference “blood and soil” or “Jews will not replace us” — clearly evoke racism or anti-Semitism.

But one was much stranger: “White sharia now.”

“White sharia” began as an online white nationalist meme in 2016 as a reference to Islamic religious law. The white nationalist turn of the phrase plays on the reductive misconception that sharia is simply the means by which Muslims subjugate women. White nationalists, the thinking goes, should similarly dominate women — and impost their own “white sharia.”

But, the SPLC explains, white nationalists were divided on whether they should include the “dominion over women in their white ethnostate platform.”

One blogger agreed that feminism should be abolished — “feminism,” he wrote, “is yet another aspect of the Jewish long con against white men and women” — but was conflicted on why white nationalists were drawing inspiration from the “Islamic world.”

According to the SPLC, the originator of the white sharia meme is an ex-Marine named Sacco Vandal, who hosts podcasts write on his blog called VandalVoid. In a post titled “In Defense of White Sharia,” he stumped for the meme and applauded what he called the “rigidly codified patriarchy” of the Islamic world.

“We have to strip females of suffrage and most if not all political, legal, and economic power,” Vandal wrote.