Palestinian Shot During Clash At Site Of Attack On Hiking Children 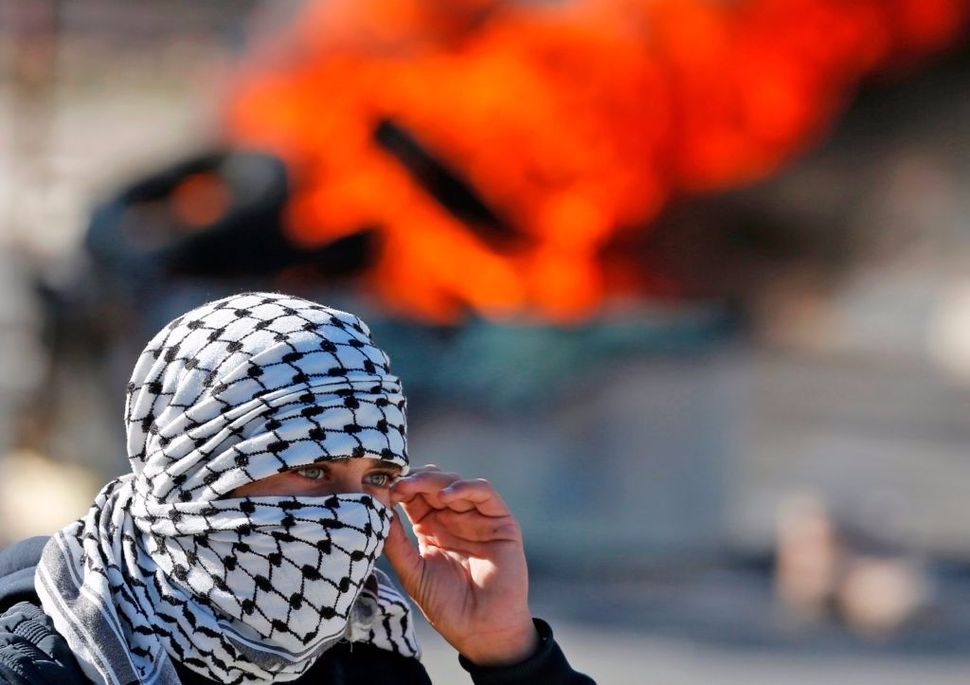 A masked Palestinian boy stands in front of flames during clashes with Israeli soldiers at the entrance of the village of Qusra in the West Bank on December 4, 2017. Image by ABBAS MOMANI/AFP/Getty Images

JERUSALEM (JTA) — A Palestinian man was shot by an Israeli civilian during clashes between Palestinians and right-wing activists near the site of an attack several days earlier on a group of Jewish children hiking in the West Bank.

On Monday, dozens of Palestinians reportedly threw rocks at the group of activists from Otzma Yehudit, a far-right Israeli political party, outside the northern West Bank Palestinian village of Qusra. Israeli soldiers diffused tensions by turning back the activists, Ynet reported.

The shot Palestinian was critically wounded in the chest, the Palestinian Maan news agency reported.

“I would expect the police to deal with the Palestinian rioters throwing rocks and boulders,” one right-wing activist, Itamar Ben Gvir, told Ynet. “When dozens of Palestinians throw massive rocks intended to kill, the army should be opening fire.”

The activists visited the area without requesting authorization from the Israeli military. The group did inform the Israel Defense Forces that it would gather there, according to Ynet.

The area is deemed a closed military zone, meaning entrance to the area requires prior coordination with the IDF.

The activists said they visited the area to show a Jewish presence four days after the children on a bar mitzvah trip were surrounded by a group of rock-throwing Palestinians. On that trip, an Israeli father escorting the hike, one of two carrying a gun, fired into the crowd to break it up. A local Palestinian farmer was killed in the incident. The IDF said the father shot in “self-defense.”

Palestinian Shot During Clash At Site Of Attack On Hiking Children