U.S. Consulate In Jerusalem Warns Of Violence Before Trump’s Speech 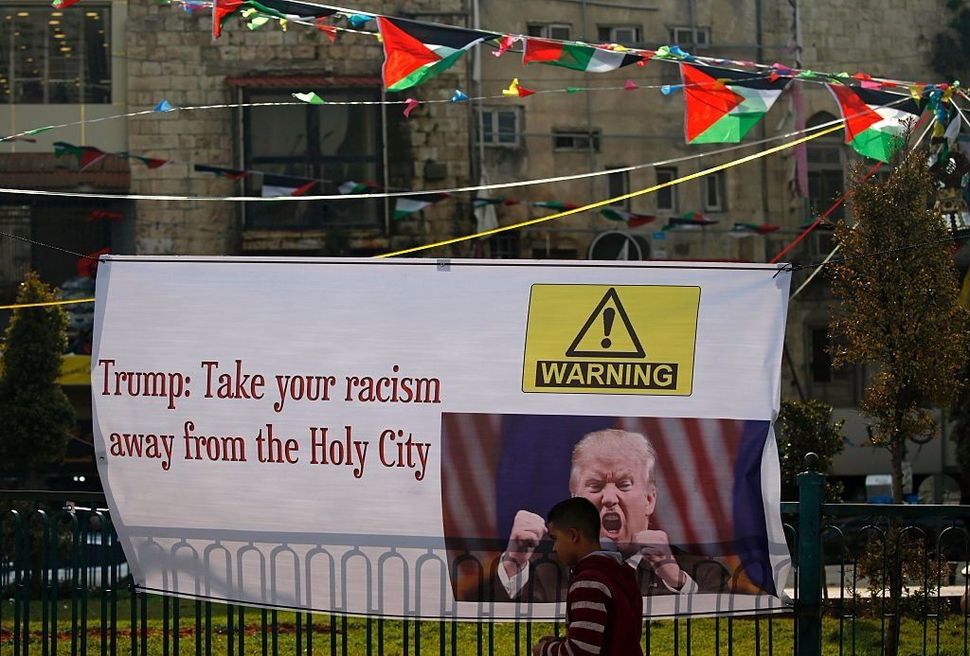 A Palestinian youth walks past a protest banner in the West Bank city of Nablus bearing an image of US President-elect Donald J. Trump and a slogan against Trump’s intention to move the US Embassy from Tel Aviv to Jerusalem on January 19, 2017. Image by JAAFAR ASHTIYEH/AFP/Getty Images

WASHINGTON (JTA) — As President Trump prepares to address the issue of Jerusalem in a White House speech, the U.S. Consulate in Jerusalem instructed U.S. officials not to travel to the Old City or West Bank in the face of reports that there will be protests.

Sarah Huckabee Sanders on Tuesday afternoon confirmed rumors circulating in Washington, D.C., that Trump would speak the next day about whether he would recognize Jerusalem as Israel’s capital and move the embassy.

She would not divulge further details, but government officials in Jordan and the Palestinian Authority said Trump had announced his intention to move the embassy to Jerusalem, although it was not clear if he outlined a timetable.

Along with the leaders of Jordan and the P.A., Trump also spoke Tuesday with the heads of Israel, Egypt and Saudi Arabia.

Palestinian Authority President Mahmoud Abbas warned Trump that any action on moving the embassy would destabilize the region and could scuttle the peace talks that Trump’s son-in-law, Jared Kushner, is hoping to revive. Other world leaders have also cautioned Trump against making the move.

The White House, in a readout of the calls, did not provide specifics of what Trump said regarding Jerusalem.

“The president reaffirmed his commitment to advancing Israeli-Palestinian peace talks and the importance of supporting those talks,” the readout said. “He underscored the importance of bilateral cooperation with each partner to advance peace efforts throughout the region. The leaders also discussed potential decisions regarding Jerusalem.”

The U.S. Consulate in Jerusalem, referring to reports that Trump’s remarks would spark Palestinian protests, instructed U.S. government personnel and their families not to travel on Wednesday to the Old City or to the West Bank.

It also said U.S. citizens should be alert to dangers.

“United States citizens should avoid areas where crowds have gathered and where there is increased police and/or military presence,” the advisory issued Tuesday said.

U.S. Consulate In Jerusalem Warns Of Violence Before Trump’s Speech