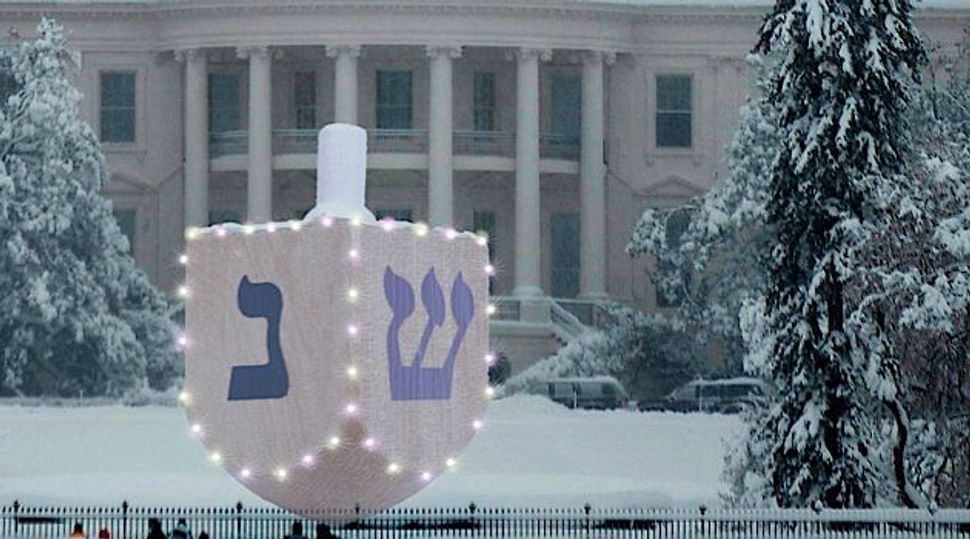 White House Hanukkah: Instead of a menorah, a dreidel should appear as a symbol of the holiday on state property. Image by Kurt Hoffman

President Trump is hosting his first White House Hanukkah reception on Thursday, keeping up with a tradition dating back to the George W. Bush presidency and kept by Barack Obama.

There will be some major differences, however.

First, the party, which ballooned in recent years into a massive event requiring two separate rounds of menorah lighting to accommodate all the invitees, will shrink back to its original size, with only one reception.

Another difference – the Democrats aren’t invited.

According to congressional sources who surveyed Jewish politicians, it appears that no Democratic Jewish lawmakers were invited to Trump’s Hanukkah party. Neither were liberal Jewish leaders such as Rabbi Rick Jacobs, president of the Union for Reform Judaism. Instead, there will be more invitees from Jewish circles supportive of Trump.

There are currently 30 Jewish members of Congress — 28 of them Democrats, including some of Trump’s harshest critics, like Sens. Chuck Schumer and Bernie Sanders and Rep. Adam Schiff.