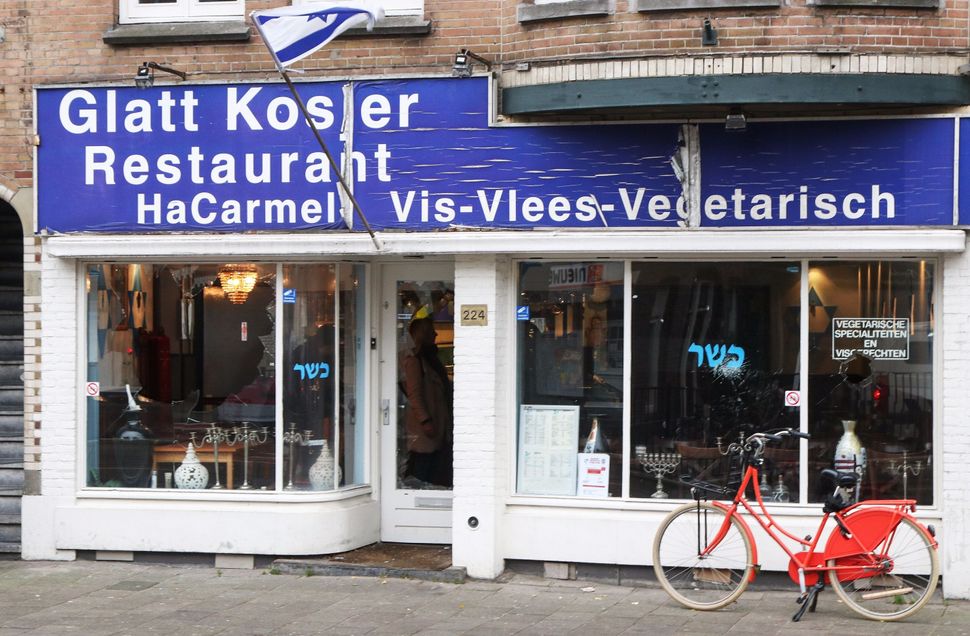 The restaurant’s window was damaged where there is a “Kosher” sign in Hebrew. Image by Getty

AMSTERDAM (JTA) — Police are investigating the smashing of a window of a kosher restaurant in a heavily-Jewish part of the Dutch capital by a man wearing a Palestinian flag.

The incident at HaCarmel restaurant occurred Thursday morning, hours after President Donald Trump recognized Jerusalem as Israel’s capital. The AT5 television station showed a video of the incident, in which a man holding a large stick while holding a Palestinian flag and wearing a Palestinian keffiyah, or shal, on his head proceeds to smash the windows and kick down the restaurant’s doors as passersby and two police officers look on. The officers wait until he breaks into the restaurant. They pause as he returns out to the street from the restaurant’s interior holding an Israeli flag that he took from there. He throws it at their feet. Then they overpower the man and arrest him.

“Jerusalem is recognized as the capital by the United States of America, so the windows of an Israeli restaurant in Amsterdam are smashed.  Only logical. The Palestinian shall completes the story,” Federative Jewish Netherlands wrote on Twitter.

Last year, a Jewish woman, Victoria Waniewicz, was stabbed in her back by a Brazilian man whom a judge deemed unfit to stand trial because of insanity, and who was hospitalized in a psychiatric institution of his choosing for one year.

Police beefed up their presence around the restaurant and other Jewish institutions in the capital, according to the Federative Jewish Netherlands report.