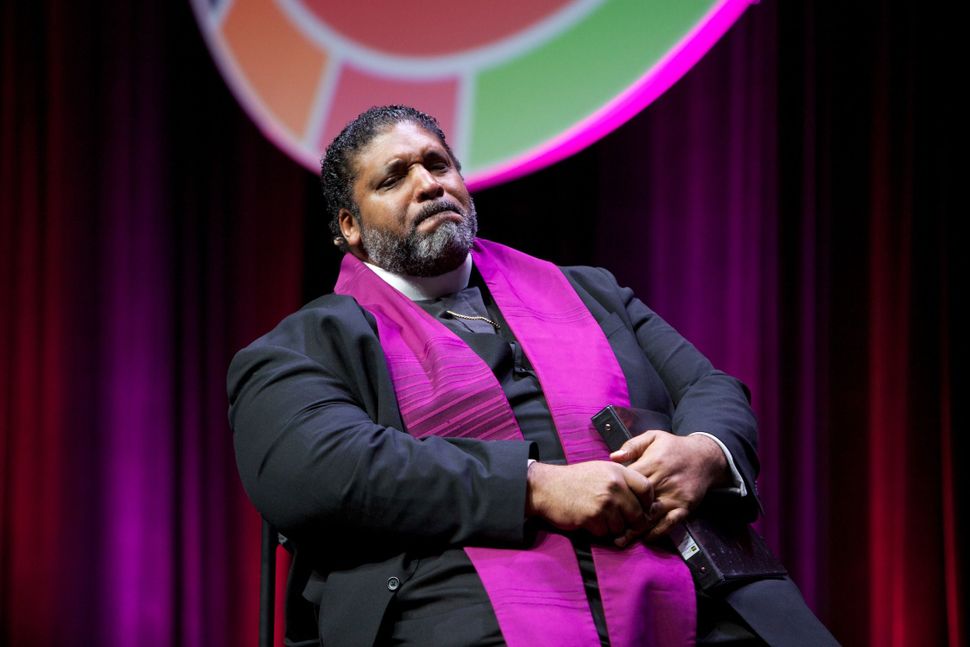 Rev. William J. Barber II, a black minister and one of the country’s foremost progressive organizers, addressed a huge audience of Reform Jews on the opening night of the denomination’s biennial gathering — where he called on the Reform movement to join him in his newly-launched campaign to fight poverty.

For many, Barber’s speech at the Union for Reform Judaism event on Wednesday evoked the civil rights struggle of yesteryear — a history the Reform movement celebrates often.

Flanked by leaders of the largest branch of American Judaism, Barber moved between cadences, raising his voice and quoting scripture and decrying the resurgence of white nationalism. The audience cheered throughout the speech, rising to their feet or waving their arms in encouragement.

Speaking from the stage, Rabbi Lucy Dinner of the URJ heralded Barber as “one of today’s most powerful prophets” who was carrying the mantle of Rev. Martin Luther King, Jr., who spoke at a Reform convention in 1963.

“Rosa Parks dead. Rabbi Heschel dead. Ghandi dead. MLK dead,” Barber said, evoking past icons of progressivism. “But we are their children and we are alive.”

The day before, Barber had announced the launch of a new Poor People’s Campaign, inspired by King’s campaign of the same name which began 50 years ago. Barber and his co-organizers hope to mount large protests on 40 consecutive days next year in at least 25 state capitals. Crowds are expected to be in the tens of thousands.

Following Barber’s speech, URJ leadership announced the adoption of a series of new resolutions, including one encouraging the “pursuit of racial justice.”