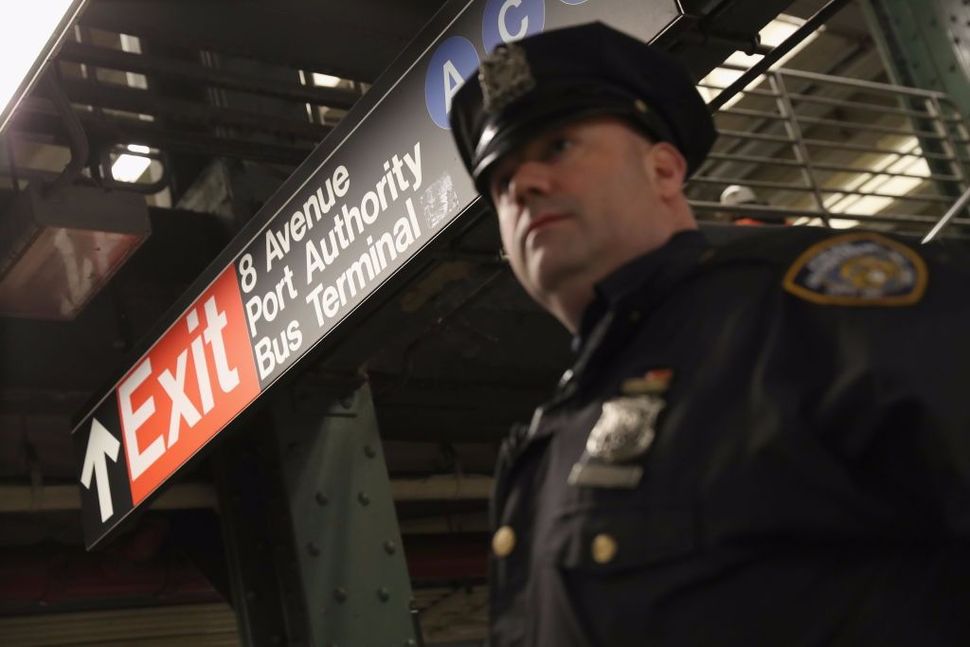 A policeman stands at a closed-off underground walkway near the site of a pipe bomb explosion on December 11, 2017 in New York City. Police said that Akayed Ullah, 27, a Bangladeshi immigrant living in Brooklyn, set off the pipe bomb, which was attached to his body, in an underground walkway connecting the subway to the Port Authority bus terminal. Image by John Moore/Getty Images

(JTA) — The suspect in a pipe bomb attack on New York’s Port Authority Bus Terminal said he was motivated by Israeli actions in Gaza, CNN reported.

Akayed Ullah spoke with authorities at Bellevue Hospital, where he was taken after the bomb went off prematurely. He was the sole casualty in the attack when his homemade bomb partially detonated in a tunnel connecting the Times Square subway station with the Manhattan transit hub during Monday’s morning rush hour.

New York City Police identified Ullah, 27, as a resident of Brooklyn. He is said to be of Bangladeshi origin and has lived in the United States for the last seven years. CNN cited a “law enforcement source”  who said Ullah said he was as upset with an unspecified “incursion into Gaza.”

On Friday, rockets fired at southern Israel from Gaza damaged the entrance of an empty kindergarten in the town of Sderot. Israel responded late Friday night with air strikes on Hamas military installations in Gaza that killed two Hamas operatives.

On Saturday the Israel Defense Forces discovered and demolished a terror tunnel that crossed into Israel from central Gaza.

“He detonated the bomb, the explosive chemical in the bomb went off, it did not have the desired affect of causing the pipe itself to shatter, which would’ve caused the more significant damage,” N.Y. Gov. Andrew Cuomo said on MSNBC.