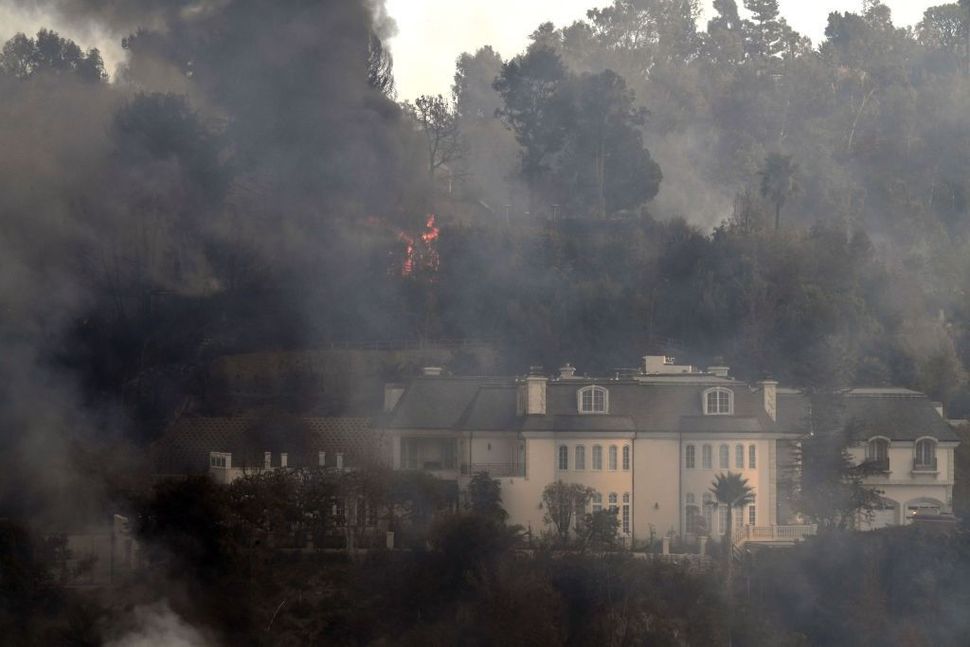 Flames are seen behind a Bel Air mansion threatened by the Skirball Fire in west Los Angeles, California on December 6, 2017. Image by ROBYN BECK/AFP/Getty Images

(JTA) — Most of the Jewish institutions that had been threatened by the so-called Skirball Fire in Los Angeles have resumed normal operations.

All evacuation orders, road closures and restrictions due to the fire in the Bel Air area were lifted Sunday afternoon, the Los Angeles Daily News reported. The fire remained at 85 percent containment on Tuesday following the calming of the Santa Ana winds beginning Sunday.

The Valley Beth Shalom Synagogue in Encino, California, which took in about 25 Torah scrolls from area synagogues and schools for safekeeping, announced Friday that it would resume normal operations. The same day, the Stephen Wise Temple was cleared to hold Shabbat services and brought its Torah scrolls back from Valley Beth Shalom in time for the services.

The Leo Baeck Temple announced Monday that while its buildings and grounds were not burned, they suffered significant smoke damage and the temple would not be able to reopen its facilities right away. Many of the Leo Baeck events were moved to Stephen Wise, which also invited the members of the smoke-damaged temple to join it for Shabbat services.

The Milken Community Schools reopened Monday for regular classes. The Los Angeles eruv remained undamaged by the fire and was available for Shabbat.

The Skirball Cultural Center reopened Friday and held a Hanukkah festival two days later that was moved indoors due to air quality concerns.

The Skirball Fire broke out on Dec. 6, one of several wildfires blanketing the area. It destroyed six homes and damaged 12 others, and required the evacuation of about 700 homes as well as an apartment building. It damaged 475 acres.

On Tuesday, the Los Angeles Fire Department said the blaze was caused by an illegal cooking fire at an area encampment.