Pence Puts Off Visit To Israel To Lobby For Tax Plan 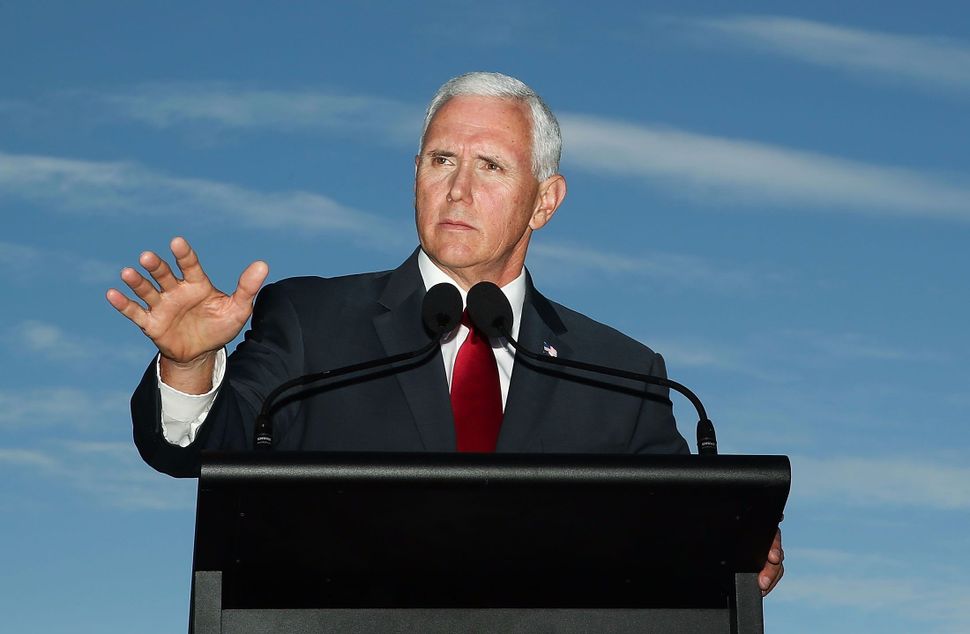 (JTA) — U.S. Vice President Mike Pence’s visit to Israel has been postponed by several days so that he can stay in Washington to promote the Trump administration’s tax reforms in Congress, according to Israel reports.

Pence had been scheduled to arrive in Israel on Sunday to meet with Israeli and Palestinian officials and also was scheduled to speak to the Knesset and light the Hanukkah menorah at the Western Wall, before traveling to Egypt. He will be meeting with Prime Minister Benjamin Netanyahu and President Reuven Rivlin separately at their offices in Jerusalem during his Israel visit.

Earlier this week Palestinian President Mahmoud Abbas said he would not meet with Pence due to President Donald Trump’s announcement of U.S. recognition of Jerusalem as Israel’s capital.

Under a revised but not final schedule, according to reports in the Israeli media, Pence will arrive in Israel Wednesday evening from Egypt, and speak at the Knesset on Thursday. His visit also reportedly includes stops at the Yad Vashem Holocaust memorial and the Western Wall.

Since he is no longer meeting with Abbas, the visit to Bethlehem reportedly has been removed from the schedule. Bethlehem has said it would not accept a visit from Pence, Haaretz reported. Pence, who is a devout Christian, reportedly does not have any churches on his schedule during his visit to Israel.

Meanwhile, according to Hadashot news, the custodian in charge of the keys to the Church of the Holy Sepulchre, who is Muslim, has refused to officially receive Pence at the church during his visit to Jerusalem, citing Trump’s announcement of recognition of Jerusalem as Israel’s capital.

Pence Puts Off Visit To Israel To Lobby For Tax Plan