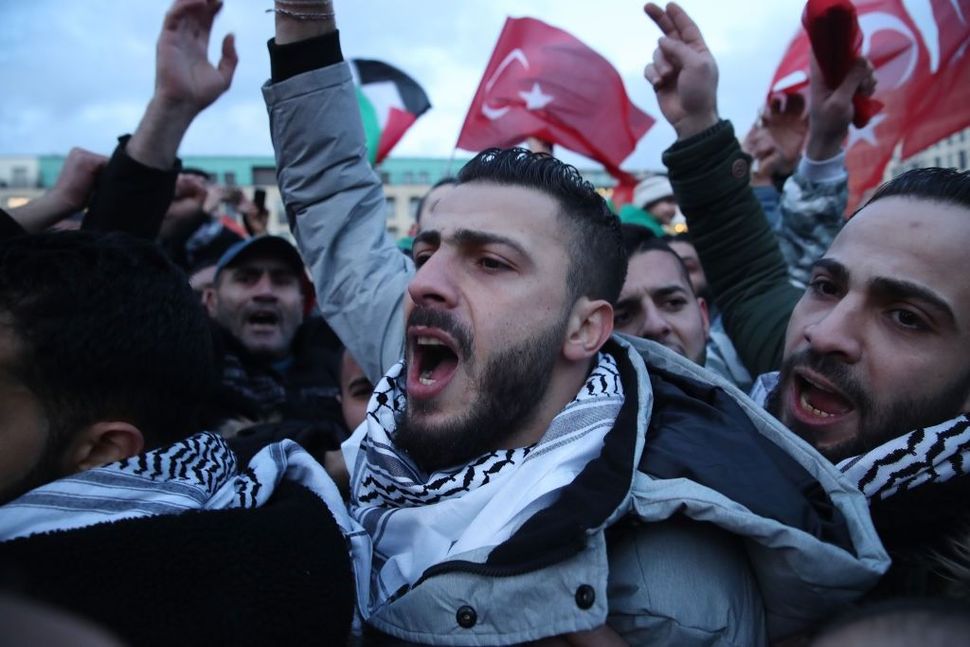 But the study commissioned by the American Jewish Committee’s Ramer Institute for German-Jewish Relations in Berlin also suggests that refugees from persecuted minority communities are more likely to take a stand against anti-Semitism and for Israel.

Titled “Attitudes of refugees from Syria and Iraq towards integration, identity, Jews and the Shoah,” the research report was prepared by historian and sociologist Günther Jikeli of Indiana University and the University of Potsdam, Germany, with help from Lars Breuer and Matthias Becker.

The report, based on interviews with 68 refugees, comes amid a series of virulent anti-Israel and anti-America demonstrations in the German capital  denouncing the U.S. recognition of Jerusalem as Israel’s capital. Thousands of protesters  burned homemade Israeli flags and crowded city subway stations chanting anti-Israel and anti-American slogans on their way to rallies.

At the same time, in a show of solidarity with Jewish communities in Germany, local imams joined with Christian and Jewish leaders in public celebrations of Hanukkah, including the annual candle-lighting ceremony at the Brandenburg Gate.

The tensions run deep, the new study indicates. Anti-Semitic attitudes and rejection of Israel are widespread among the newcomers, the head of the Ramer Institute, Deidre Berger, said in a statement.

“Anti-Semitic thinking and stereotyping are very common … even among those who emphasize that they ‘respect’ Judaism or that there is no problem living together between Muslims, Christians and Jews in their countries of origin and in Germany,” Jikeli said in a statement.

Berger said that given the depth of anti-Jewish hostility in Arab countries, this is not surprising based on the stereotypes that are implanted in schools, mosques and government propaganda in some countries.

At least one million Muslim refugees have arrived in Germany since the summer of 2015.