Women Gets Death Threats For Standing Up To ‘Modesty Police’ 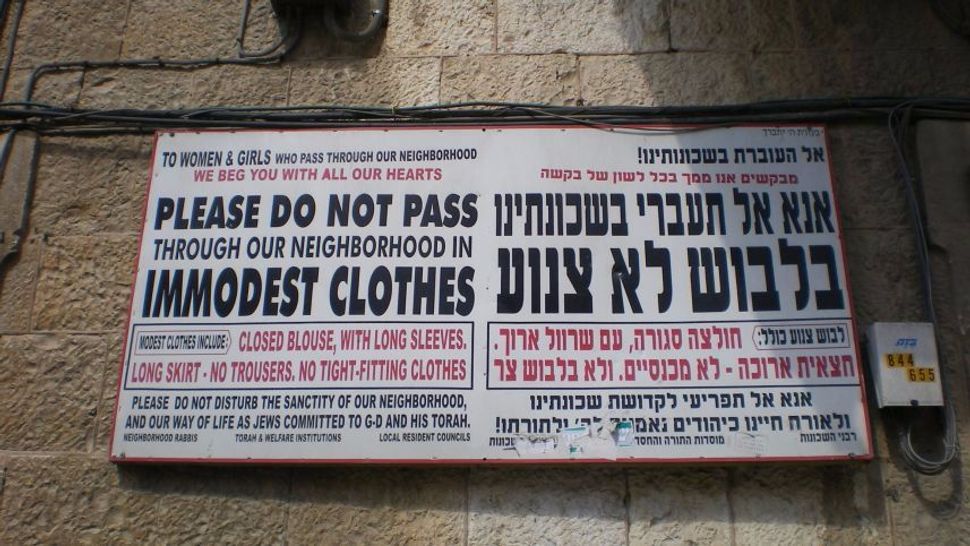 JERUSALEM (JTA) — At least two of the women who asked Israel’s Supreme Court to remove signs that demand women dress modestly have been targeted with death threats.

The women said they received calls on Thursday and Friday threatening them with a kabbalistic ritual calling for their deaths, Ynet reported.

Posters also were hung in the city giving the women’s personal details including their addresses, phone numbers, and the names of their children, and urged people to call the women and stop agitating against the signs, according to Ynet.

The women lodged a complaint with the Beit Shemesh police.

Earlier this month, the Supreme Court rejected an appeal by the municipality of a lower court order in July to remove the signs. The high court ruled the signs, which the justices say exclude women from the public sphere, must come down by mid-December.

The court also ordered the Israel Police to prevent new signs from being put up to replace the old ones.

On Thursday the municipality attempted to remove the signs for the second time in less than a week, but were blocked by extremists, who immediately began to replace the signs.

Beit Shemesh was first ordered to remove the signs in 2015, when the high court said that they “cause serious harm to human dignity, equality, personal choice and autonomy,” Ynet reported.

Two years later, when the signs were not removed, the women who filed the original lawsuit turned to an administrative court to enforce the ruling.

Beit Shemesh has seen conflict between haredi and non-haredi and secular residents over restrictions on women’s dress and gender-segregated seating on public buses. In a widely publicized incident in 2011, an 8-year-old Orthodox girl was spat on by haredim on the way to school for her perceived immodest dress.

Women Gets Death Threats For Standing Up To ‘Modesty Police’