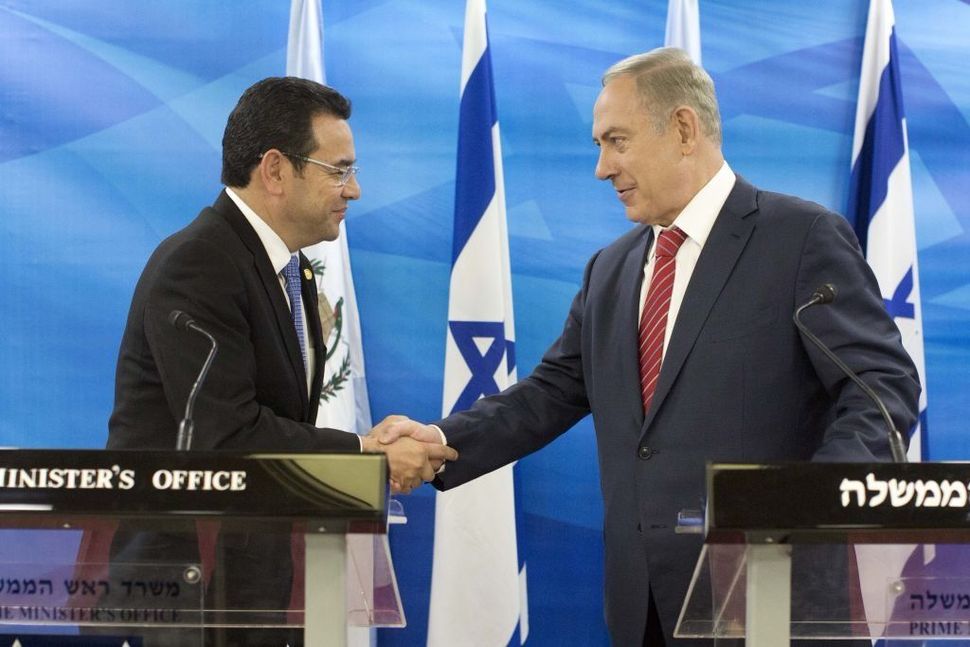 (JTA) — The president of Guatemala announced that he would move his country’s embassy to Jerusalem.

President Jimmy Morales in a Facebook post on Sunday said that he has instructed his country’s chancellor “to initiate the respective coordination so that it may be.” He said he made the decision following a conversation on Sunday with Israeli Prime Minister Benjamin Netanyahu.

The leaders, he said, spoke about “the excellent relations that we have had as nations since Guatemala supported the creation of the state of Israel. One of the most important topics was the return of the embassy of Guatemala to Jerusalem.”

The announcement comes after President Trump earlier this month announced that the United States would recognize Jerusalem as Israel’s capital and begin taking steps to move its embassy from Tel Aviv to Jerusalem. Guatemala’s embassy also currently is located in Tel Aviv.

Morales, who enjoys a large base of conservative Christian support, visited Israel in November 2016, to mark the 69th anniversary of the Partition Plan for Palestine vote in the United Nations. He was feted for the actions of Guatemala’s then-ambassador to the U.N., Dr. Jorge Garcia Granados, who enlisted Latin American states to vote in favor of the partition plan.

Shortly after his election in October 2015, Morales visited the synagogue in Guatemala City, met with members of the Jewish community and declared his desire to visit Israel. His tenure has seen a significant improvement in relations with Israel, including Guatemala’s positions at international meetings.

Guatemala is home to about 1,000 Jews out of a population of 15 million.