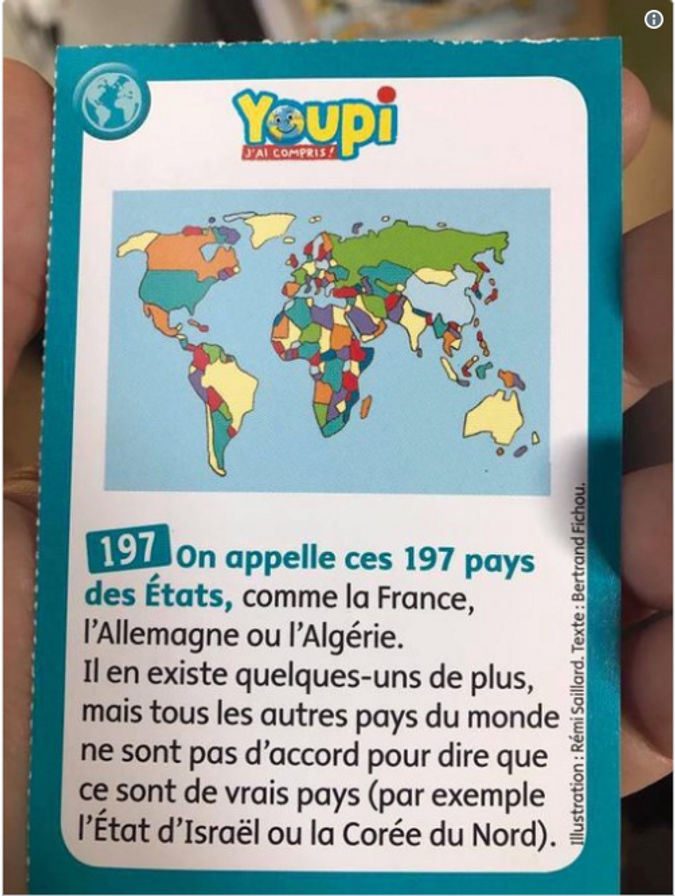 A card published in the French children’s magazine Youpi, which states that Israel is not a real country. Image by Twitter

(JTA) — One of France’s oldest publishing houses announces the recall of a magazine for children featuring trivia game cards stating that Israel and North Korea are not real countries.

The cards that appeared in the January 2018 edition of the Youpi magazine, which belongs to the Groupe Bayard publishing house, read: “197: We call these 197 countries states, like France, Germany or Algeria. There are others, too, but not all the world’s countries agree that all of them are real countries (for example the State of Israel or North Korea.”)

CRIF, the federation of Jewish communities and organizations of France, protested the publication of the cards. Francis Kalifat, the president of CRIF, called the cards, intended for children aged 5-10, a “factual lie and a flagrant one at that.”

Pascal Ruffenach, the president of the Bayard publishing house, which was founded in the 19th century, said in a statement that his establishment “clearly never intended to cast into doubt Israel’s existence,” saying the card in question was an “error.”

The publishing house said it will recall the magazines and pulp the cards in question.