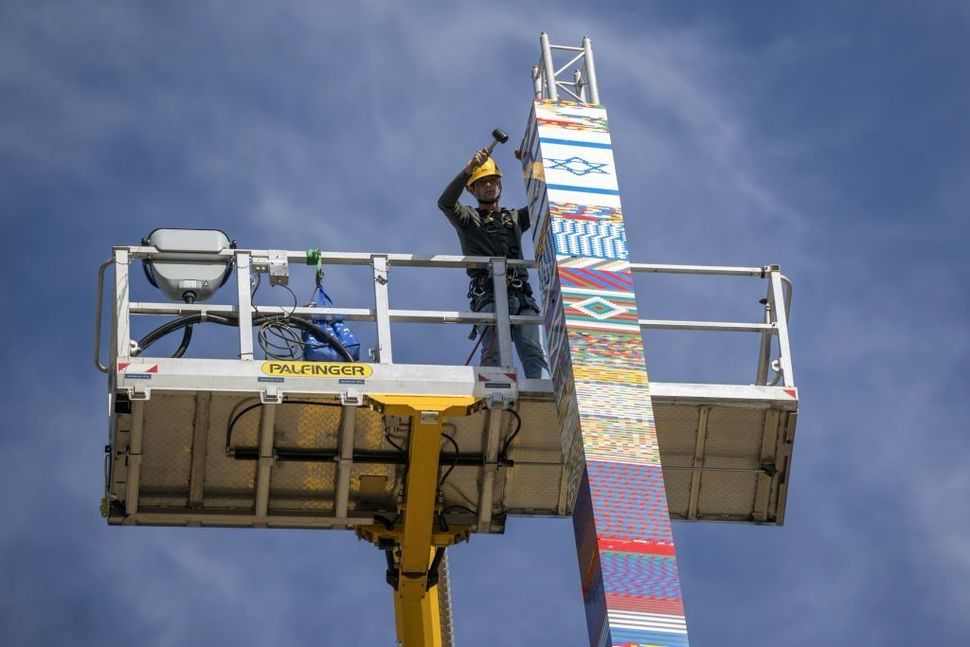 A man helps fix the top of a LEGO tower under construction in Tel Aviv on December 27, 2017, as the city attempts to break Guinness world record of the highest such structure. Image by JACK GUEZ/AFP/Getty Images

The 118-foot tower was built from more than half a million Lego bricks donated by residents of Tel Aviv, in memory of a young cancer victim.

Construction of the tower next to the Tel Aviv City Hall was completed on Wednesday. It was built by a cadre of Tel Aviv municipal workers and local volunteers, according to AFP.

The structure has been named Omer Tower, in memory of Omer Sayag, who died of cancer in 2014 at the age of 8. Sayag built Lego towers and other constructions throughout his illness, when he was too weak to play outside, the Jerusalem Post reported. Among his most complex projects was a replica of the Taj Mahal.

Sayag’s kindergarten teachers, Ben Klinger and Shirley Bardugo, conceived of the project to honor the child’s memory, working in conjunction with an Israeli educational group, Young Engineers, according to the Post.

The Young Engineers were responsible for the technical challenges involved in creating a standalone tower of that height, including putting its individual sections together at the end.

The previous Guinness World Record of 115 feet was set in 2015 by the Italian subsidiary of Lego.

The municipality told AFP that it will submit proof, including photos taken from a drone, to Guinness.