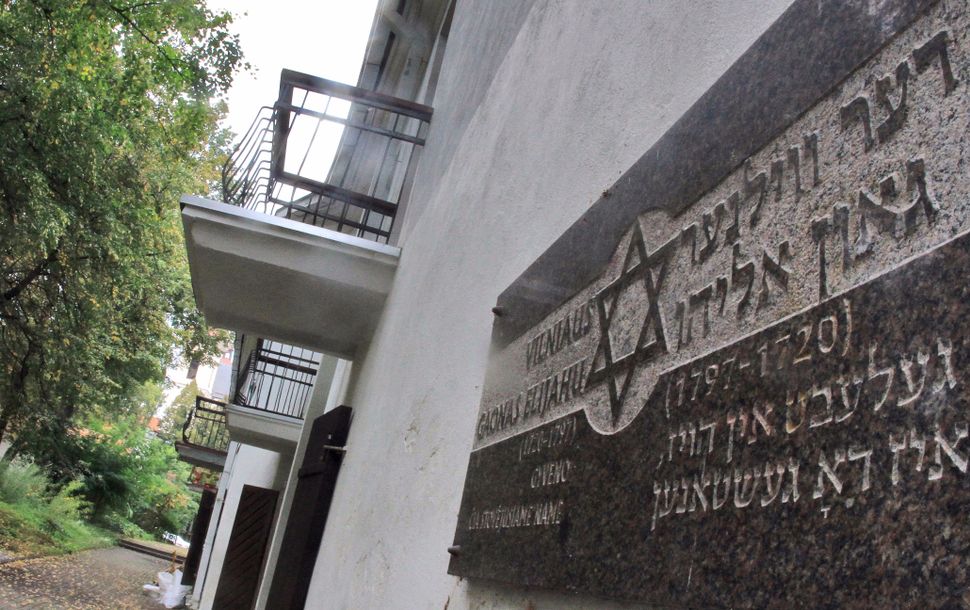 A monument to a Jewish philosopher in Vilnius, Lithuania. Image by Getty

(JTA) — In an unusual move, a Lithuanian court voided the local Jewish community’s April internal elections, declaring that communal bosses have no legal authority to continue their rule.

The Dec. 21 ruling by Vilnius District Court, which is the first of its kind in years in Europe, is the latest development in the fight against what many Lithuanian Jews consider a power grab by the community’s president, Faina Kukliansky, and may affect for her ability both to continue to represent members of her community and to administer millions of dollars given to that community by the government as restitution for the Holocaust.

Kukliansky is also the co-chairperson a foundation set up in 2011 to administer Holocaust restitution funds worth roughly $40 million.

The ruling by Judge Rima Bražinskienė, which was translated by the site Defending History, was in a lawsuit filed earlier this year by the Vilnius Jewish Community against Kukliansky’s Jewish Community of Lithuania, which is a national umbrella group for all of the country’s Jewish communities, known also as LBZ.

The lawsuit followed a mid-campaign rule change which had the effect of disenfranchising the 2,200 members of the Vilnius Jewish Community, by far the country’s largest, leading to Kukliansky’s re-election. When a critic of Kukliansky, Simonas Gurevicius, was elected head of the Vilnius Jewish Community in May, LZB voided that election, saying that the voters were “mainly Russian speakers calling themselves Jews, with only a minority of people with Litvak blood.”

Critics said LZB was stoking ethnic tensions and flagging some Jews as agents of Russia in a country where many people and politicians resent Russia’s expansionist tendencies. The controversial LZB statement noted the vote took place while “military exercises are currently underway rehearsing the scenario of Lithuania and Poland under attack.”