Who Is Putting Anti-Israel Stickers On This Synagogue? 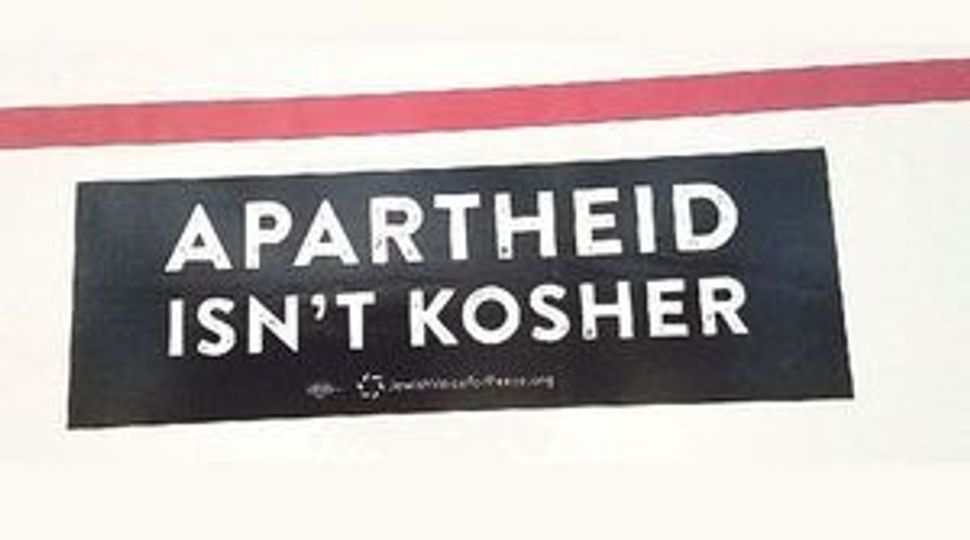 Two anti-Israel stickers were posted earlier this month on the property of a Conservative synagogue in Queens, New York.

Both stickers — one saying “Palestinian Human Rights,” another saying “Apartheid Isn’t Kosher” — are sold by Jewish Voice for Peace, a group that supports the boycott, divestment and sanctions movement against Israel.

Rabbi Robyn Fryer Bodzin of the Israel Center of Conservative Judaism told the Queens Chronicle that the situation is “annoying. It’s wasting a lot of my time. It’s not scaring us.”

“We’re curious as to why we are being targeted,” she added. “If a representative from Jewish Voice for Peace wants to reach out, why aren’t they picking up the telephone or sending an email?”

Fryer Bodzin said she is very pro-Israel, but the synagogue welcomed people of all political persuasions.

The New York City chapter leader of JVP, Rosalind Petchesky, told the Chronicle that the newspaper telling her of the incidents was “the first any of us knew about this thing at all.”

The sticker placement “was not an official JVP action,” she said, adding that she disapproved of it and that she was willing to discuss the matter with the rabbi.

A spokesman for city councilman Rory Lancman told the paper that “defacing a synagogue with anti-Israel propaganda is the very definition of a hate crime.”

But Petchesky pushed back on that idea. “Those are not hate crime statements, they’re not hateful toward Jews,” she said. “They’re statements of political sentiments. I share those sentiments.”

Who Is Putting Anti-Israel Stickers On This Synagogue?