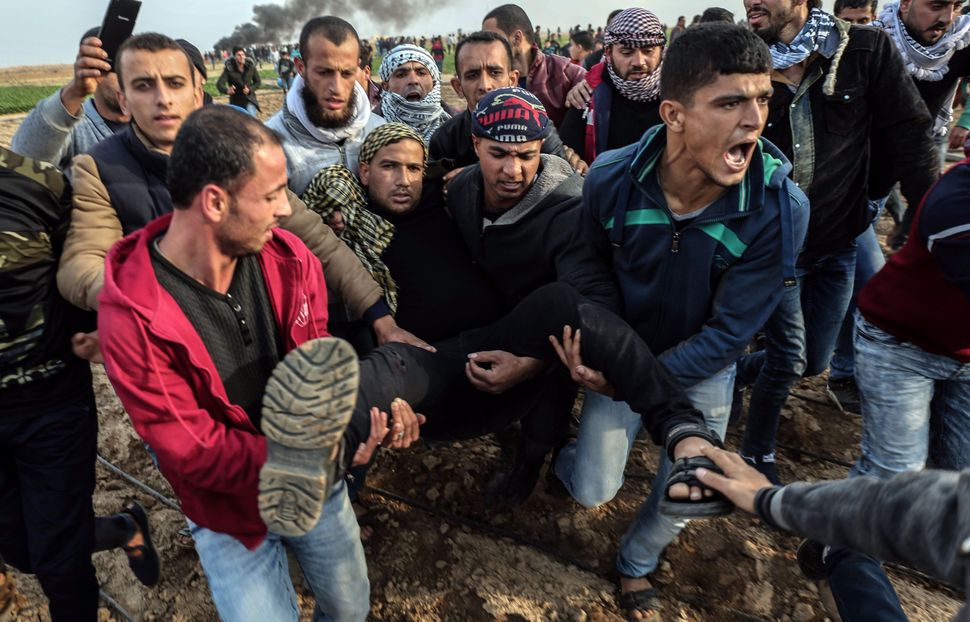 Protestors carry a man injured in a clash with Israeli armed forces in Gaza. Image by Getty

Over 50 people were injured in clashes with Israeli military during a “day of rage” protest in Gaza against President Donald Trump, Reuters reported.

Thousands of Palestinians took to the streets in Gaza and the West Bank to protest Trump’s decision this month to recognize Jerusalem as the capital of Israel. Protesters in Gaza chanted, “Death to America, death to Israel, and death to Trump,” and fired rockets into Israel, drawing a military response.

A spokeswoman for the Israel Defense Forces said soldiers shot at “main instigators.” The army also said that protesters were throwing rocks and Molotov cocktails at army sites. The IDF said they struck sites associated with Hamas with tank fire and missiles. In the West Bank, soldiers responded to protests in Bethlehem, Nablus and elsewhere with live fire, rubber bullets and tear gas.

One rocket shot from Gaza hit a building in a small village in southern Israel. No injuries were reported. Two other rockets were intercepted by the Iron Dome missile defense system.

Four Palestinians in Gaza were reported to be in serious condition after clashes with IDF soldiers.