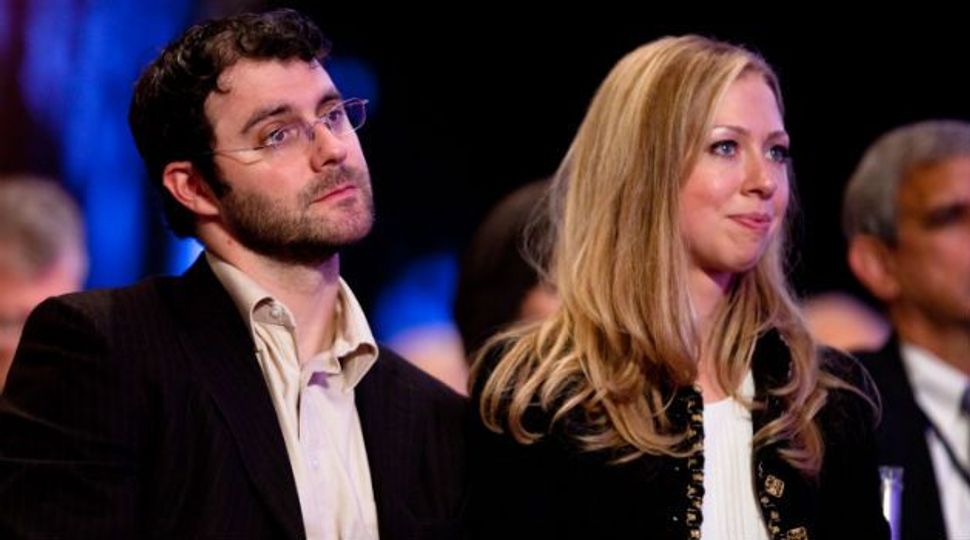 Anything for the In-Laws: Marc Mezvinsky sits with wife Chelsea Clinton during the closing Plenary session of the seventh Annual Meeting of the Clinton Global Initiative (CGI), which is run by her famous dad, Bill Clinton. Image by Getty Images

(JTA) — Chelsea Clinton on Wednesday afternoon reproached a Twitter commenter who accused her of being a Satanist by proudly proclaiming that she is married to … a Jew.

We’ll spare you the details, but the former First Daughter had been bantering with various celebs when someone brought up the Church of Satan, which does not believe in Satan, according to its FAQ. It is instead an atheist group that coopts Satan as “a symbol of pride, liberty and individualism.” The point appears to be that the group does not believe in either supernatural extreme: God or the devil.

When Chelsea exchanged New Year’s greetings with the church, it sent the conservative media into paroxysms of glee. Variations  on the headline “Chelsea Clinton Sends New Year’s Greetings to the Church of Satan” currently populate a significant portion of the web.

On Wednesday afternoon, Chelsea Clinton replied to one of her trolls: “Oh goodness gracious. We can be civil, cheerful, respectful to & friends with people who don’t share our religious beliefs. Sometimes, we even marry them. I’m a Methodist & my husband is Jewish, thank you for asking.”

Marc Mezvinsky, Clinton’s husband is, indeed, Jewish. What’s not clear is if his coreligionsists will be pleased to be lumped in with a body calling itself the “Church of Satan,” even if its ironic intent is to undercut the belief in a supernatural evil.