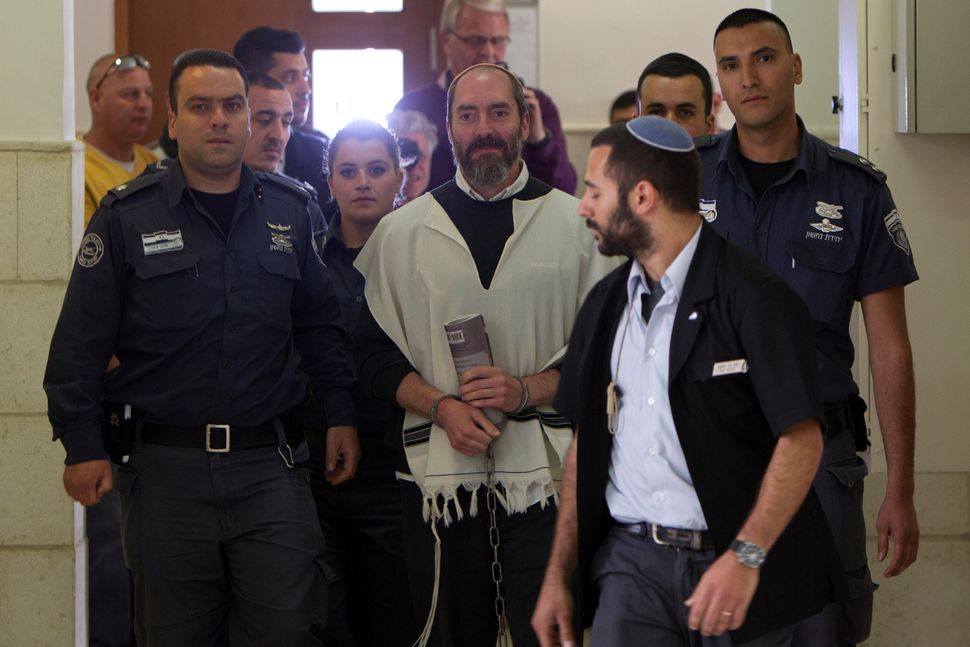 American-born Israeli settler Yaakov (Jack) Teitel arrives for his trial at the Jerusalem District Court on April 9, 2013. An Israeli court sentenced him to two life terms in prison for the murder of two Palestinians in 1997. Teitel, 41, was found guilty in January of murdering a bus driver and a shepherd as well as two separate attempted murders, for illegal possession of weapons and incitement to violence. Image by AHMAD GHARABLI/AFP/Getty Images

Along with killing two Palestinians and attempting to murder five Jews and Arabs, Teitel also assembled a package bomb that seriously injured the son of a messianic Jew in Ariel and set up a pipe bomb near the home of prominent left-wing professor Ze’ev Sternhell.

The crimes occurred between 1997 and 2008, some while Teitel was in Israel as a tourist. Teitel admitted to all the crimes, but said that he did not recognize the court’s authority.

The brit milah ceremony will be held on Saturday morning, requiring that Teitel be granted a furlough for the entire Shabbat.

Teitel attended the brit of a son born two years ago, which took place on a weekday within the prison facilities.

“Thousands of terrorists have been released home in the past few years—I’m merely asking to be present for my son’s brit. I’ll go back to prison later. I expect to receive this small bit of compassion at the very least,” Teitel told his attorney, Azriel Friedenberg of the Honenu organization, according to Ynet.

The request submitted Sunday by Friedenberg asked that Teitel “be allowed to take an irregular vacation for the bris ceremony considering the exceedingly special circumstances” and said he would “consent to every condition” mandated by the prisons service.