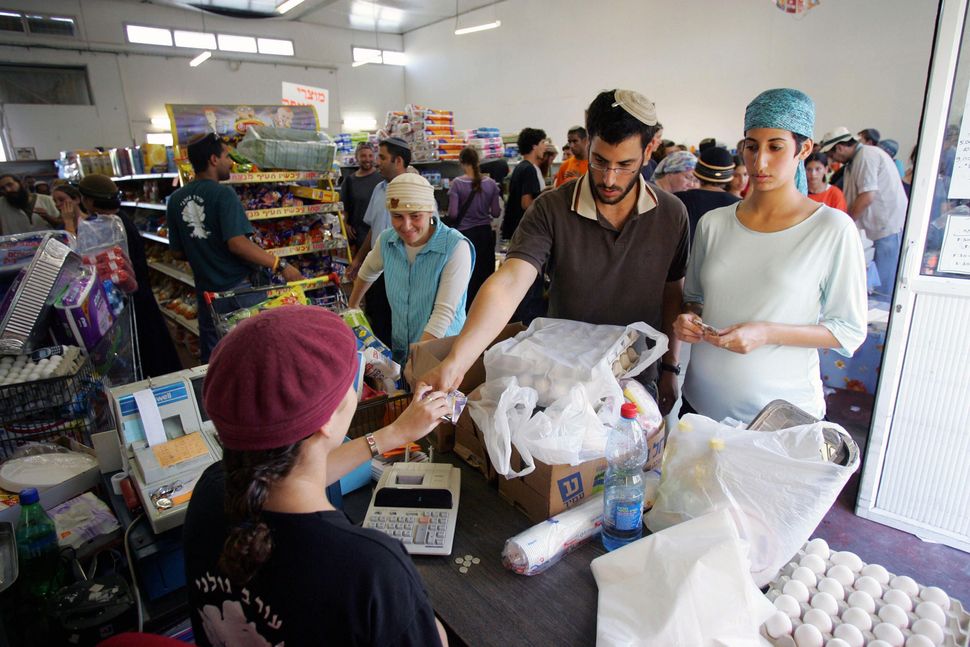 Israelis pay for groceries at the local supermarket in the settlement of Neve Dekalim, August 11, 2005. Image by DAVID FURST/AFP/Getty Images

JERUSALEM (JTA) — The Knesset approved a controversial bill which will keep supermarkets and other businesses closed on the Sabbath.

The so-called mini-markets bill passed Tuesday morning by a narrow vote of 58 to 57 in its second and third readings. The vote came after a 15-hour filibuster by the opposition parties.

Under the new legislation, the interior minister has the authority to strike down new municipal bylaws which would allow some businesses to remain open on Shabbat. The current interior minister is Aryeh Deri, head of the Sephardic Orthodox Shas party. Critics have said it is unlikely that Deri will allow municipal bylines that permit stores to be open on Shabbat to remain on the books.

“The passage of the law is not a ‘Haredi victory,’ it is the preservation of the status quo and the victory of the silent majority, which is interested in the continuation of the Jewish character of the country and is interested in resting on the day of rest,” Deri said after the law passed. Passing such legislation was part of the coalition agreement which brought the haredi Orthodox parties into the current Likud-led government.

The law does not apply retroactively to existing bylaws, including a law which allows grocery stores in Tel Aviv to remain open. Gas station convenience stores will be permitted to remain open, however.

Four members of the Yisrael Beiteinu party, which is part of the coalition, voted against the bill. One Likud lawmaker, Sharren Haskel, skipped the vote so that she would not have to vote in favor. The head of the left-wing Meretz Party, Zahava Galon, appealed the law to the Supreme Court, requesting an injunction to prevent it from being enacted while the court was considering her petition. Galon’s petition said that the legislation violates the basic civil rights of Israelis and “allows a minster who lives a religious lifestyle to force it on all.”