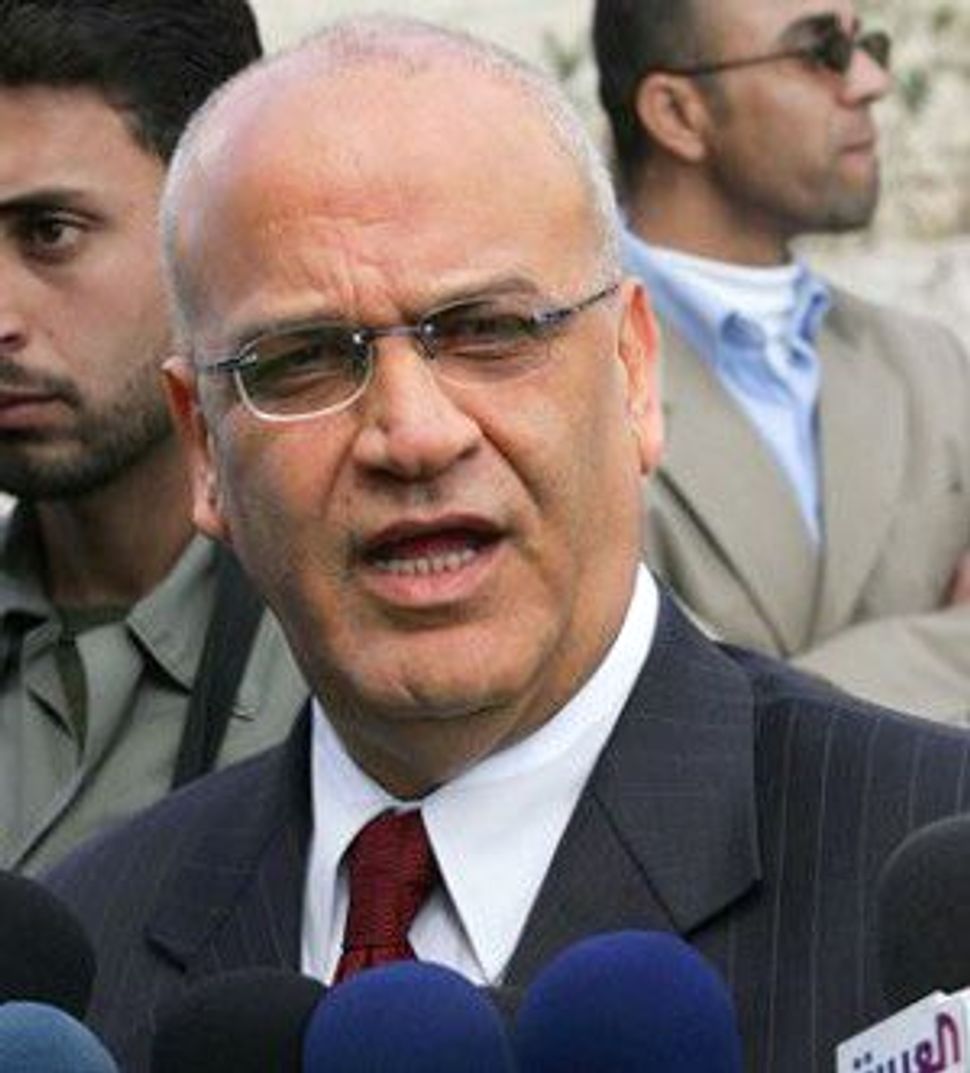 Negotiator: For decades, Erekat has led the Palestinian team in talks with Israelis. Image by COURTESY OF THE PALESTINIAN AUTHORITY

JERUSALEM (JTA) — The chief negotiator for the Palestinians said they will not resume any kind of peace negotiations with Israel until the United States walks back its recognition of Jerusalem as Israel’s capital.

“The Palestinian leadership will not accept any offers for negotiations unless the American decision on Jerusalem is annulled,” Saeb Erekat said Tuesday in an interview with the official Voice of Palestine radio.

Erekat said the decision “removed Jerusalem from any negotiations.”

He also said the Palestinian leadership does not want to clash with the Trump administration, but that President Trump is the one who created the conflict, stressing that “our peace will not be at any price.”

Referring to the Trump administration’s threat to cut its aid to UNWRA, the United Nations Relief and Works Agency for Palestinian refugees, until the Palestinians return to the negotiation table, Erekat charged that the United States wants to “liquidate the Palestinian cause by demanding the dismantling of UNRWA, cutting aid, starving refugees and closing schools.”

In a tweet Jan. 2, Trump wrote that the Palestinians “don’t even want to negotiate a long overdue peace treaty with Israel. We have taken Jerusalem, the toughest part of the negotiation, off the table, but Israel, for that, would have had to pay more. But with the Palestinians no longer willing to talk peace, why should we make any of these massive future payments to them?”

Palestinian Authority President Mahmoud Abbas has also said since the Jerusalem announcement that he is not willing to return to talks as long as the United States is the sole mediator.

Erekat said the PLO Central Council meeting scheduled for Sunday in Ramallah would discuss defining the Palestinian relationship with Israel in all areas, as well as how to confront and annul the U.S. decision on Jerusalem.