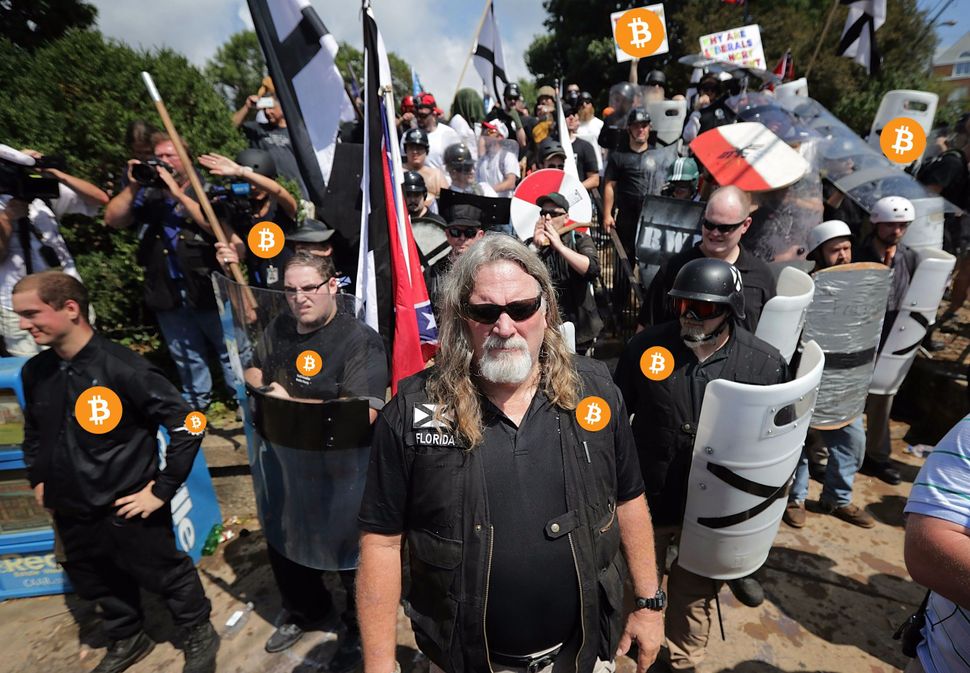 If you’re a vocal neo-Nazi or well-known sympathizer with white nationalists, chances are you’ve been fired from your job and blocked by online, peer-to-peer payment systems like PayPal and Apple Pay. So how do you support your hateful lifestyle?

With Bitcoin, of course.

The boom-and-bust originator of cryptocurrencies has seen wide adoption by leading white nationalists and conspiracy theorists, including Richard Spencer, Alex Jones, and Mike Cernovich. Andrew Anglin, the founder of the Daily Stormer who is on the run from process servers related to his harassment of a Jewish woman in Whitefish, Montana, has published his Bitcoin “wallet” online. As of early January, he had Bitcoin reserves worth over half a million dollars.

A hacker associated with the Daily Stormer, Andrew Auernheimer, has nearly $3 million worth of Bitcoin, Business Insider reported. Even far-right politicians, such as those in Germany’s AfD party, espouse Bitcoin.

Bitcoin is an anonymous currency, and protected by software called blockchain, which makes it nearly impossible to determine who is behind its peer-to-peer transactions. Though the currency’s value has quadrupled in the past six months, it remains a volatile investment, and in December lost nearly a third of its value in one day.

That hasn’t stopped Forbes and other investment sites from pushing Bitcoin has a great investment for 2018.

Alt-right researchers and cryptocurrency experts have begun following Bitcoin transactions among people on the far-right. @NeonaziWallets, a Twitter bot programmed by cybersecurity researcher Andrew Bambenek, posts daily tallies of the Bitcoin holdings of figures like Richard Spencer and Auernheimer, known online as weev. It also posts data for organizations like Stormfront and Spencer’s National Policy Institute.