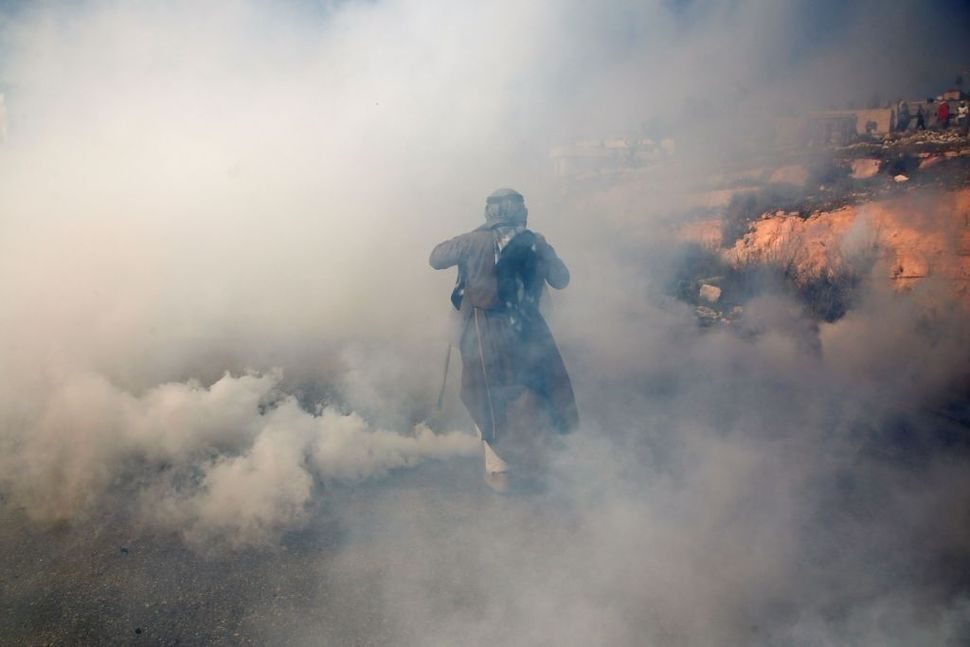 A Palestinian man stands amid tear gas during clashes between Israeli forces and Palestinian protesters following a demonstration calling for the release of Palestinian prisoners from Israeli jails, on January 13, 2018, in the West Bank village of Nabi Saleh. Image by ABBAS MOMANI/AFP/Getty Images

JERUSALEM (JTA) — A Palestinian man was killed during clashes with Israeli soldiers near Qalqilya in the West Bank.

Dozens of Palestinians were protesting in Jayyus, located near the western border of the West Bank, and began throwing rocks at Israel Defense Forces soldiers deployed near Qalqilya.

The soldiers responded with riot dispersal methods and live fire, the IDF confirmed.

The man was identified by Palestinian Authority Health Ministry as Muhammad Ahmed Salim, 24. He reportedly was shot in the head at close range.

The Palestinian Maan news agency reported that Salim was 28. Maan reported that the Israeli military prevented ambulances from immediately reaching the wounded man. Maan also reported that Salim, a student at the Al Quds Open University in Qalqilya, spent three years in an Israeli prison and was released in 2016.

According to Maan, Salim is the 17th Palestinian killed since President Trump announced on December 6 that the United States would recognize Jerusalem as Israel’s capital.