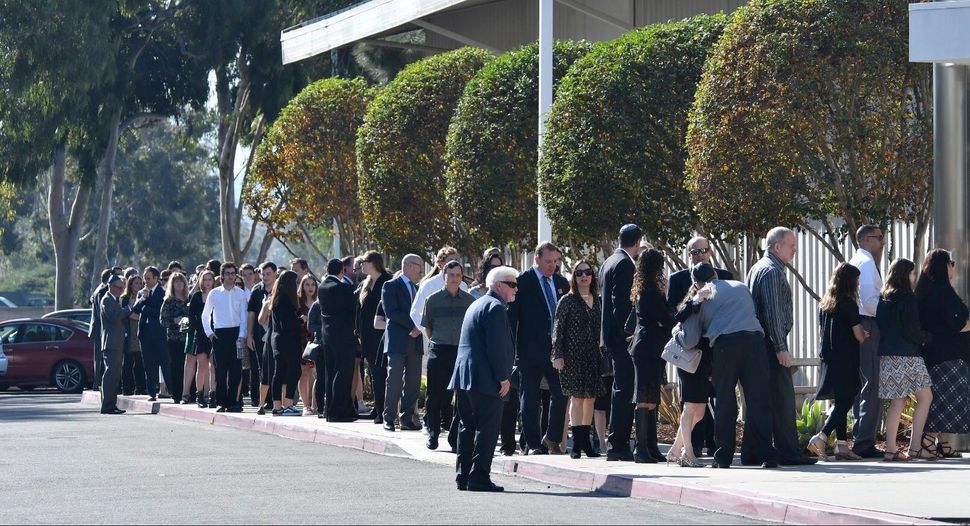 Bernstein’s parents pleaded for their son’s death to serve as a wake-up call for his “dream” of bringing change to a broken world.

“As we lay Blaze to rest, we ask that communities around the world that were touched by Blaze’s life, help us keep his memory and loving spirit alive,” wrote Gideon Bernstein and Jeanne Pepper in a statement.

“Blaze was on a path to repair our world and it is a moral imperative that we all take steps now to make sure that his dream is realized,” they continued. “We won’t succumb to hate, bitterness or disillusionment; we will use wisely the time we have left together. When we stop crying we will start doing positive things to affect change. We ask that everyone work towards something good. Stop being complacent. Do something now.”

Scores of people lined up outside University Synagogue in Irvine before the somber event.

Attendees at the service were given a small spatula and a recipe that Bernstein, a cooking maven who worked on a food blog at University of Pennsylvania, created over the holiday break, the local Patch news site reported.

Blaze Bernstein, a popular pre-med student at the University of Pennsylvania, disappeared on Jan. 3 after going to meet a high-school friend in a park near his home in suburban Los Angeles. His body was later found in a shallow grave.

Samuel Woodward, the friend, was arrested after police said DNA evidence tied him the killing. He has reportedly made disturbing comments online about guns and torture. He is being held without bail and is expected to be arraigned Tuesday.

Friends and strangers have created a makeshift memorial for Blaze Bernstein in the park where he was killed. They include scores of small rocks, which are often used as a symbol of remembrance in Jewish tradition.

Whoever created this, I thank you. Your art has touched me. You are making the world a better place. pic.twitter.com/KOuixcvQK3