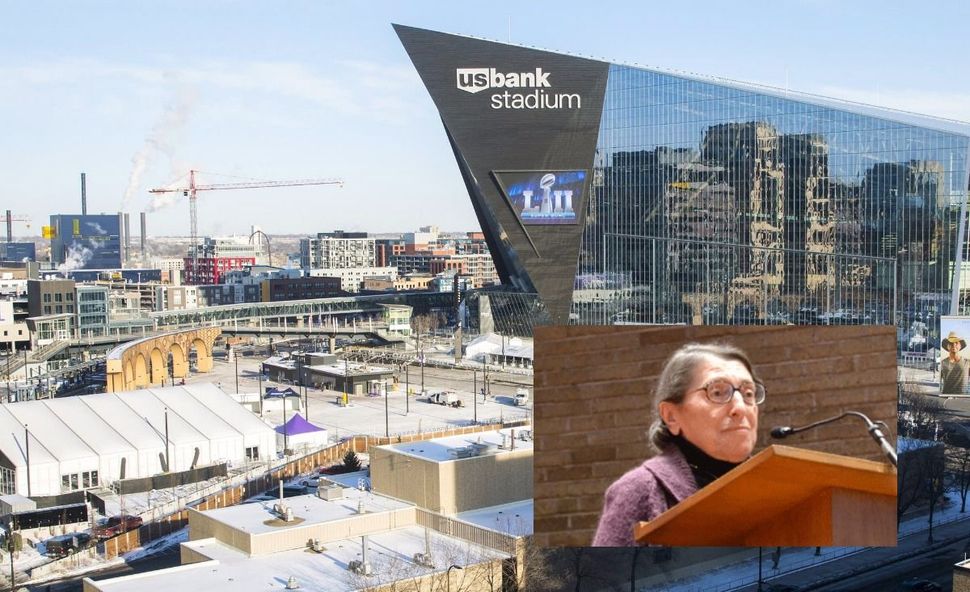 Dora Zaidenweber, pictured with the US Bank Stadium in Minneapolis. Image by Forward Montage

A traveling exhibition of stories of Holocaust survivors will be shown in the Minneapolis/St. Paul airport in Minnesota for the duration of this year’s two-week-long Super Bowl festivities, the Star Tribune reported. The big game, hosted at the US Bank Stadium in Minneapolis, is expected to draw over a million people to the city.

“Transfer of Memory,” an exhibition which shows the stories of over a dozen Holocaust survivors, has traveled around the Midwest and been viewed by more than 80,000 people since its creation in 2011. Over a third of the survivors portrayed in the photographs and text have died since then.

“There are still a lot of people that don’t believe the Holocaust existed. They deny it,” said Reva Kibort, a Minneapolis resident whose story is included in the exhibition. Kibort survived the liquidation of the Warsaw ghetto in Poland and a Nazi work camp. She arrived in Minnesota as an orphan when she was 14. She settled in a suburb of Minneapolis and raised three children.

Over 40 photographs will be shown around the airport.