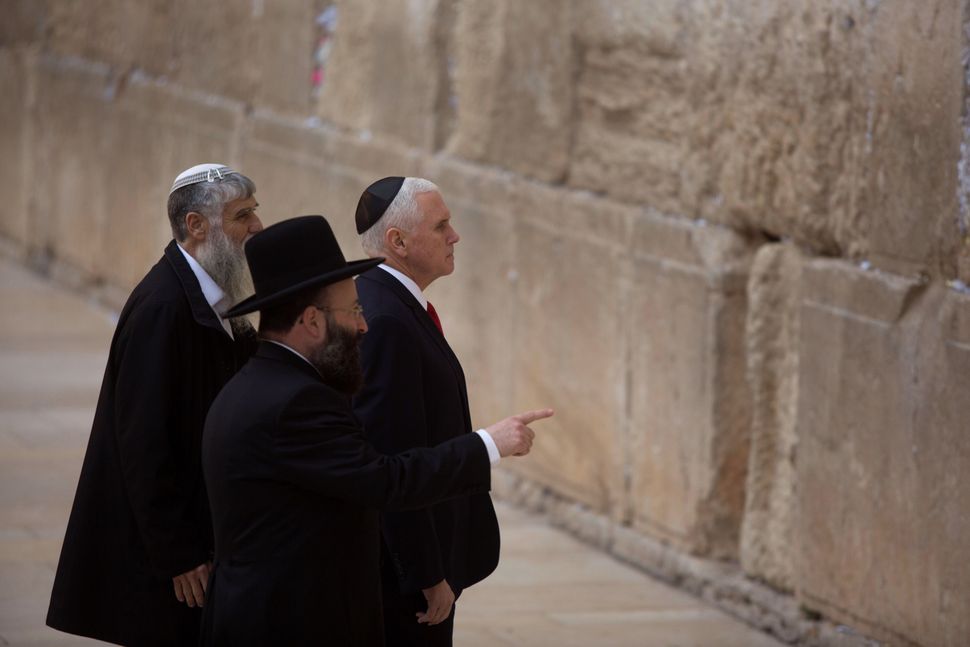 Female reporters reacted with frustration on Tuesday after they were fenced behind their male counterparts while covering Vice President Mike Pence’s visit to the Western Wall in Jerusalem.

The press pool, set up on a raised platform overlooking the Western Wall and the stone square in front of it, was divided in half: Male reporters, including cameramen, were given a front-row birth to photograph Pence meeting with Western Wall officials and touching his hand to the wall. Female reporters were kept behind a low fence, and were not informed in advance of the arrangement.

The Jerusalem Post reported that the women were separated in “keeping with Jewish tradition at the holy site.” Several female reporters, however, said they had never been kept apart from their male counterparts in visiting the Wall.

“I was invited to cover this event by the US Embassy. I am not here as a private individual. I am standing her behind a fence and can’t do my job,” Tal Schneider, an Israeli political reporter, told Maariv.

On Twitter, female reporters reacted with frustration to what they called an unprecedented arrangement using the hashtag #PenceFence.

When it’s a bit hard to do your job / women journalists forced to stand behind the men at the separation fence at the western wall for Mike Pence’s visit #PenceInIsrael #PenceFence pic.twitter.com/IsXbJ0jTi5

Factually incorrect to say that “keeping with Jewish tradition at the holy site, female journalists were placed behind a barrier.” I have covered many visits; this was an aberrant first. #PenceFence https://t.co/7t7nolErJz


Pence and his wife, Karen, were at the Western Wall for about ten minutes on Tuesday. Mike Pence prayed before the Wall on the men’s side while Karen Pence stayed on the women’s side. The visit was billed as “private,” and no other Israeli politicians were in attendance. David Friedman, U.S. Ambassador to Israel, and Jason Greenblatt, U.S. Middle East Envoy, were in attendance.

In a statement to reporters, Pence said he was “inspired” by the visit. This is his fourth trip to Israel.